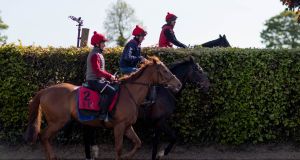 Horses get a workout at Jessica Harrington’s yard ahead of the resumption of racing in Ireland next week. Photo: Morgan Treacy/Inpho

There are many things that you can take from the current events both in America and with regards the pandemic gripping the world but one should be that, for all its occasional positives, social media truly can be a really horrendous place. From misinformation to straight out abuse, racism, homophobia and whatever else, it can erode away at you at the best of times so getting messages to “kill yourself” after a rugby match is probably reason enough to try to avoid it. Those are the sorts of messages Jacob Stockdale said he received in the wake of Ireland’s Rugby World Cup quarter-final loss to New Zealand last year and which he has learned to deal with already in his career, even at the age of just 24. Moving on and it’s not often that a sport has the chance to start, somewhat, from a blank canvas but, with rugby in New Zealand set to get back underway with a brand new domestic tournament next week, that’s exactly what the authorities have done. Among the new laws which will be in operation are the replacements of red-carded players after 20 minutes of their dismissal while a golden point rule will mean there are no drawn matches.

On to GAA and Seán Moran writes in his column this morning that summer’s mosaic has slipped away one tile at a time and it’s hard not to start craving hot summer’s evening championship games around this time. “We’ll miss the process, the carefully arranged emergence of contenders and the mounting evidence presented by their progress even – and maybe especially – if we are to have a blitzkrieg championship rolling remorselessly through the winter,” he writes. One GAA player who has certainly been kepy busy during the current pandemic is Monaghan’s Ryan Wylie who has round the real meaning of team ont the front line. “The Monaghan captain is a radiographer in the Mater Hospital in Dublin and, like the rest of his colleagues, is just about able to breathe out now. The past three months have been the most hectic, strange and intense time of their working lives,” writes Malachy Clerkin who spoke to him this week.