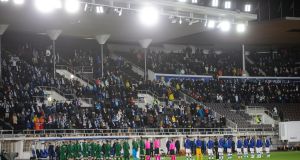 Around 8,000 fans watched Ireland and Finland at the Olympic Stadium in Helsinki last night. Photograph: Inpho

Ireland’s wait for a goal extended to 390 minutes of football after last night’s disappointing 1-0 defeat to Finland in front of a crowd of around 8,000 at the Olympic Stadium in Helsinki. Still to get their first win under Stephen Kenny - after five attempts - Ireland maintained their recent improvement in terms of possession and passes but an error by goalkeeper Darren Randolph in taking a short kick-out led to Fredrik Jensen’s 66th minute goal. Despite the slow start to the new manager’s term, Ken Early believes new faces give grounds for optimism: “If anyone in Ireland remembers Wednesday night’s game, it will be because it was the first time we saw Dara O’Shea and Jason Knight playing for Ireland, and not because it was the second time we saw Pukki and Jensen score that goal against us.”

Leinster’s 21-year-old lock Ryan Baird has been ruled out of Ireland’s rearranged Six Nations games at home to Italy next Saturday week and France in Paris seven days later. Connacht’s Ultan Dillane has been added to the squad in his place. In his column this morning, John O’Sullivan explains why head coach Andy Farrell will have to broaden his selection base after using just 26 players in three Six Nations matches since succeeding Joe Schmidt. Fullback and the backrow appear to be the main positions up for grabs, and “it will be interesting to see if Farrell elects to stick, where possible, or twist when the team is announced next week.”

1 Transmission of Covid-19 on flight into Ireland linked to 59 infections
2 Covid-19: Public urged to ‘stay at home’ as 1,025 further cases confirmed in State
3 When Anthony Clare met ‘calculating, disturbing’ Jimmy Savile
4 Martin Feeley: Hospital admissions don’t justify pressing the panic button
5 Seán O’Brien: Anger over my parents’ break-up never left me
6 Two hundred Irish retailers for all your online Christmas shopping
7 Couple found guilty of murdering Irish dancer with ‘devil’s breath’ drug
8 Garda inquiry into video appearing to show crowded shebeen
9 Sacha Baron Cohen: ‘I had to ring the alarm bell and say democracy is in peril’
10 Maureen Dowd: Biden the anti-venom for Trump’s poisonous menace
11 Australia demands answers after women taken from Qatar Airways flight and strip-searched
12 The Irish teenager with more TikTok followers than Miley Cyrus and Ellen DeGeneres
13 Life under Level 5: Where can I go, who can I see, what is closed and what is open?
14 Coronavirus: Italy and Spain introduce sweeping new restrictions
15 Sean Moncrieff: We’re all in prison. But I’m digging a tunnel
16 Gardaí to investigate whistleblower claims at Limerick city and county council
17 President urged to not sign Bill on mother and baby home records into law
18 ‘I’m sleeping with my ex-boyfriend and want him back – but don’t want to scare him off’
19 Lincoln Project rejects threat over Kushner and Ivanka billboards
20 Strengthen your muscles without leaving the house
21 Selling PPE as an excuse to keep businesses open ‘not lawful’, Varadkar says
22 David McWilliams: Lockdown decision makers still get paid. Those they shut down do not
23 The baby black market
24 Gardaí find ‘fully operational bar’ after visiting suspected shebeen
25 New Covid-19 contact-tracing regime to be established for schools
26 We need to reverse our thinking on lockdown
27 Seven detained after UK armed forces gain control of oil tanker in Channel
28 TV guide: 23 of the best shows to watch this week
29 Another lap for Eddie Irvine’s €4m playhouse
30 US election: Trump visits battleground states as Covid-19 numbers surge
31 The dream-home designer of Matt Damon’s Dalkey lockdown escape
32 Trauma of adoption saga outlined in court judgment
33 Rock’ n’ wool: Irish knits come in from the cold
34 Doctors are being asked to ‘play God’ in deciding who to give flu vaccine to – GP
35 Two cyclists die on roads in Co Cork at weekend
36 How to cosy up your outdoor space this winter
37 Borat 2: Rudy Giuliani’s trouser-reaching scene is the work of a daring young woman
38 Man (21) charged with breaking into a house armed with an axe
39 Q&A: Mother and Baby Homes Commission database
40 Effectiveness of Covid-19 vaccine could be known before end of year – Fauci
Real news has value SUBSCRIBE