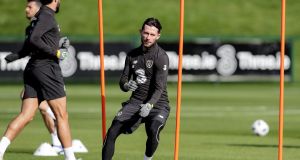 Ireland’s Alan Browne during training ahead of the Nations League match against Finland. Photo: Laszlo Geczo/Inpho

The Covid-19 confusion in the Ireland camp – which resulted in the FAI saying yesterday that an unnamed player had tested positive for the virus on Sunday but negative on Monday – took another twist late last night with the latest statement from the association revealing that the player had, on their third test, returned a positive result again. The latest developments only add to the difficulties of international football at the current time after Aaron Connolly and Adam Idah both rejoined the squad yesterday as a result of the fact that the FAI staff member who they had been deemed to be close contacts of and who had tested positive for Covid-19 in Bratislava last week had, in fact, returned a false positive. In all Stephen Kenny is without six players for tomorrow’s Nations League match in Helsinki – two who have tested positive for the virus and four who are close contacts. The Ireland under-21s – who face Italy in a European qualifier in Pisa this morning – have also seen the impact of the virus with the Italians forced to play their under-20s tonight due to multiple cases in their under-21 squad.

On to rugby and in his column this morning Gerry Thornley writes that Exeter are dead right and Saracens should lose their titles. A new book by the Guardian’s rugby correspondent Robert Kitson, entitled: The Exe Men: The Extraordinary Rise of Exeter Chiefs, comes down hard on Saracens and their “tainted titles.” He writes: “Ultimately Saracens accumulated trophies by assembling a squad no other club could afford, including Exeter, who by comparison are an honestly run club, and the only profit-making one in last season’s Premiership.” Meanwhile, Jordan Larmour has been ruled out of Ireland’s pre-Christmas schedule because he has to undergo shoulder surgery this week for a dislocation suffered in Italy. Larmour could also miss the opening two rounds of 2020-2021 Champions Cup which take place in December.

1 Trump endorsement by Jack Nicklaus leads to avalanche of dismay
2 Over 90m vote early as winning post looms for Trump and Biden
3 Supermarkets compared: How Dunnes, Lidl, Tesco and M&S measure up
4 Gardaí believe men in Cork murder-suicide chose to let woman survive
5 The Irish living life for less in sunnier climes
6 Richard Ford: America could fail. I have never felt this way before
7 Varadkar rejects allegations he acted unlawfully in sharing draft GP contract
8 France 35 Ireland 27: Ireland player ratings
9 Cork shootings: Mourners at Mark O’Sullivan’s funeral told of devoted and caring son
10 Caitlin Moran: ‘In middle age you lose the amount of f**ks you give’
11 Fintan O’Toole: Defeat for Donald Trump will shape our world
12 Explainer: The GP contract talks at the centre of Varadkar controversy
13 Nigella Lawson: ‘I feel insecure if I don’t know what I’m going to eat’
14 Ireland fall short against France as England win Six Nations title
15 Jennifer O'Connell: Ireland's pandemic compliance is extraordinary
16 The real Contagion virus is out there and it’s causing virologists to worry
17 US election: Trump using executive orders to reshape fabric of America
18 The West has failed – US and Europe have made a mess of handling the crisis
19 Coronavirus: What can Ireland learn from an Australian state’s Covid-19 success?
20 Sean Connery the man has died. Sean Connery the indestructible legend lives on
21 Irish surfer Conor Maguire rides ‘Ireland’s biggest wave’
22 ‘This could be Belfast in 1968’: How political conflict in the US could descend into violence
23 Covid-19: Johnson announces second lockdown for England
24 Even if Biden becomes president, there’s no turning back
25 David McWilliams: A plan to put Ireland’s 200,000 vacant buildings to use
26 Stockdale’s blunder and French flair: Where Ireland came undone in Paris
27 Johnny Sexton rues what might have been on a frustrating night in Paris
28 Coney Barrett unfairly targeted in attacks over childcare
29 Aoife Noonan’s How to be a Better Baker Part 1: Light and airy sponge cake
30 Covid crisis: 416 new infections bring October total to almost 25,000
31 Ireland ‘outperforming almost all European countries in controlling spread of Covid-19’
32 The sad, secret life of Whitney Houston
33 Kanturk farm shootings: A timeline
34 Most face masks to protect against coronavirus do not meet standards
35 Murder inquiry opened after deaths of mother and two children in south Dublin
36 Developers may need to go back to the drawing board as one-beds fall from favour
37 Classic horror: the 10 most terrifying short stories ever written
38 James Bond has always been a misogynist dinosaur. Now he has to change
39 Paul Flynn: My take on a famous pork shoulder feast
40 Cork shootings: ‘Devastation was impossible to imagine’, funeral hears
Real news has value SUBSCRIBE