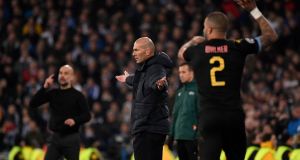 Ireland’s Six Nations clash with Italy on Saturday March 7th has been postponed due to fears over the coronavirus. The IRFU confirmed the fourth round match wouldn’t go ahead after meeting with the Minister for Health Simon Harris yesterday. The fixture - along with the women’s and Under-20s games - now has to be rearranged in an already congested calendar, with it unlikely to take place this campaign. As Gerry Thornley writes: “There is no blank weekend for the remainder of this season which, due to the Rugby World Cup, runs until June 20th when the Pro 14 final is scheduled to be played in Cardiff, after which the Irish senior squad embark on a two-week tour to Australia.” The rest of the Six Nations Championship is also in doubt, with England due to visit Rome in the final round of fixtures on March 14th.

Elsewhere Manchester City - who are facing a two-year ban from the Champions League for breaking financial fair play rules - have grabbed the initiative in their last-16 tie against Real Madrid with a 2-1 first leg win at the Bernabeu last night. Zinedine Zidane’s 13-time winners took the lead on the hour mark through Isco before capitulating late on - a Gabriel Jesus header and a 83rd-minute Kevin de Bruyne penalty, as well as a Sergio Ramos red card, leaving City firmly in the driving seat. Elsewhere Cristiano Ronaldo’s Juventus have plenty of work to do after they were beaten 1-0 away to Lyon, Lucas Tousart with a first-half winner. Tonight Manchester United welcome Club Brugge to Old Trafford in for the second leg of their Europa League last-32 tie with the scores level at 1-1 after last week’s sodden draw in Belgium. Celtic and Arsenal are also in action tonight against FC Copenhagen and Olympiakos respectively.

1 Coronavirus: Ireland’s infection peak may have passed, toll could hit 400 by August, report forecasts
2 Last couple in paradise: The Covid-19 honeymooners stranded in the Maldives
3 Coronavirus: More ‘striking’ evidence BCG vaccine might protect against Covid-19
4 Things are looking up again: Spectacular supermoon due in Irish skies
5 A Michelin-starred chef’s recipe for a simple soup with big flavour
6 Una Mullally: Leo Varadkar’s mask drops again
7 Eccentric Thai king’s flying visits ensure a colourful German lockdown
8 Coronavirus: Property rental in the jaws of the epidemic
9 I’ll be watching my father’s funeral on Zoom from New Zealand today
10 Italy likely to start relaxing lockdown on May 4th
11 Fintan O'Toole: Crisis management is what the State does best
12 Boris Johnson’s condition ‘stable’, Downing Street says
13 Spain records rise in Covid-19 deaths for first time in five days
14 John Delaney’s profligacy haunts FAI again as McCarthy departs
15 Restarting Ireland: When and how will we ‘get back to normal’?
16 Larry David’s quarantine: ‘I’m reading Woody Allen’s memoir. It’s fantastic’
17 Gerry Thornley: Global pause allows rugby to tidy up the breakdown
18 Refund scheme for commuter tickets being considered by NTA
19 Genetics shed light on origins of Irish strains of Covid-19
20 I want to change my will quickly in case I fall ill. Do I need a lawyer?
21 Coronavirus: Vaccines still needs scientific scrutiny despite global rush, expert warns
22 Donald Trump’s clown car administration has put the fear in all of us
23 WhatsApp limits message forwarding to slow spread of misinformation
24 Conor McDonald: ‘People in fitness industry need to be careful what they put online’
25 Coronavirus: Why are men twice as likely to die as women?
26 A doctor writes: Where are all the non-Covid-19 patients?
27 US prosecutors say Russia and Qatar bribed Fifa officials in World Cup bids
28 Coronavirus: Galway 2020 suspends events, lays off staff and artistic leaders
29 Coronavirus: Stop calling this a war. It’s unhelpful and dangerous
30 The difference between Ebola and coronavirus outbreaks? Lack of resources
31 Beyond the call of duty: Community gardaí help woman move her mother to safety
32 RTÉ to screen Lizzo, Lady Gaga and Paul McCartney coronavirus benefit concert
33 Coronavirus: Michelin-starred chefs band together to feed front-line workers
34 EU finance ministers hope to thrash out Covid-19 recovery plan
35 WeWork sues SoftBank after $3bn tender offer falls through
36 Consultants want private business exempt from national effort to save lives
37 Coronavirus: 99 clusters in nursing homes across the country
38 Letter to grandad who died from Covid-19: 'I'm proud of my future because I can be like you'
39 NTMA raises €6bn from bond auction to help State meet costs of Covid-19
40 Are holidays booked for July and August going to happen?
Real news has value SUBSCRIBE