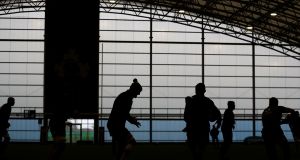 Ireland train ahead of Sunday’s match against England, at the IRFU high performance centre in Abbotstown. Photograph: Dan Sheridan/Inpho

Ireland head coach Andy Farrell has named an unchanged team to face England at Twickenham on Sunday, with Caelan Doris replacing Max Deegan among the replacements. The squad had a special guest at training with singer Bono telling them about the bond that has kept U2 together for so long, interactions down through the years with crooners like Frank Sinatra and what it meant to be “Irish” in America in the early 1980s. In his column this morning former referee Owen Doyle explains why the day of the jackal may be coming to an end, while John O’Sullivan provides a breakdown of Sunday’s referee Jaco Peyper and the three previous Ireland Tests he officiated.

Hugo Lloris made a number of superb saves to minimise the damage for Jose Mourinho’s Tottenham team, as they were beaten 1-0 at home by RB Leipzig in the first leg of their Champions League last-16 tie. The German club, playing their first game in the knockout stages of the competition, sealed their deserved advantage through Timo Werner’s second half penalty. Atalanta marked their debut in the knockout stages in style by crushing Valencia 4-1, with Josip Ilicic starring for the Italians at the San Siro. Following his team’s 2-0 win over West Ham in last night’s rescheduled Premier League match, Pep Guardiola confirmed he will still be at Manchester City next season despite their Champions League ban. Ahead of their Europa League last-32 match against Club Brugge, Manchester United manager Ole Gunnar Solskjær says Marcus Rashford’s chances of playing again this season are “touch and go”. That kicks off at 5.55pm, as does Copenhagen v Celtic, while at 8pm Olympiacos host Arsenal and Wolves face Espanyol.