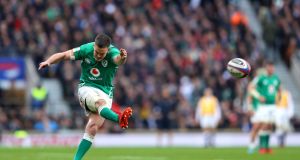 Ireland were beaten and bullied by England on Sunday afternoon. Photograph: Getty Images

Yesterday’s 24-12 defeat by England at Twickenham has made it a three-way fight to be Six Nations champions, with Ireland, realistically, down to third in the table and the outsiders after being beaten and bullied. Gerry Thornley assesses the damage after a disappointing day for Irish rugby. In his column, Liam Toland explains how England’s astute kicking game helped them establish a stranglehold on the game: “the immediate question is how do Ireland cope with such a tactic imposed upon them? This, having been beaten thrice in such fashion, is the key question for Andy Farrell and his Irish team.”

January signing Bruno Fernandes put in another man-of-the-match display as Manchester United beat Watford 3-0 on Sunday. Fernandes scored a first half penalty before Anthony Martial and Mason Greenwood sealed the points - the win moves United to fifth in the Premier League. Pierre-Emerick Aubameyang hit a brace in Arsenal’s 3-2 victory over Everton as the Gunners rallied from conceding inside 49 seconds to secure their third win in a week. Wolves also followed up on their Europa League form with a 3-0 win over Norwich. Tonight, runaway leaders Liverpool host West Ham (kick off at Anfield is 8pm). In his column this morning, Ken Early is looking ahead to Wednesday’s Champions League last-16 clash between Manchester City and Real Madrid: “Madrid are so big that beating them would a milestone in City’s European history, yet so vulnerable that City could tear them to pieces. Doing so would be Guardiola’s best European moment at City, and the best way to convince his players that what might be their last season in Europe for a while might also be their best.”

1 Coronavirus: 133 patients in intensive care as pressure on hospitals builds
2 Look on the bright side: International Space Station visible in Irish skies tonight
3 A letter to Ireland from Italy: this is what we know about your future
4 Coronavirus: Letters flow to self-isolating father whose children were found dead
5 Tempers fray as coronavirus lockdown fatigue hits Italy and Spain
6 US authorities scrutinise Zoom’s practices as app sees traffic surge
7 Coronavirus: Restrictions resulting in ‘huge’ fall in rate of infection growth
8 How to make a rhubarb and custard tart worthy of Ballymaloe
9 Ireland ‘squanders’ geographical advantage with different Covid-19 stances North and South - Scally
10 Looking for a nifty home-working desk? This Irish designer model could solve your problems
11 How to budget your way through financial realities of Covid-19
12 Seanad election: Green Party’s Saoirse McHugh fails to win seat
13 I was on the Peru rescue flight. This is what happened
14 Medtronic shares ventilator design publicly to increase production
15 Fintan O’Toole: We can’t help giving meaning to this absurd virus
16 Coronavirus: Spain suffers record number of deaths as UK figures surge
17 From yoga to HIIT training, your guide to solitary exercise
18 Meath couple’s company hit with €105m discount on purchase price
19 Gabriel Scally: North and Republic must harmonise Covid-19 response
20 Coronavirus: Northern Ireland death toll rises to 28
21 Teacher who admitted having child abuse images struck off register
22 Couple in mortgage legal-fees dispute get €10,000 compensation
23 Richie Sadlier: ‘I’ve learned the best strategy for me is to limit my thoughts to today’
24 Irish economy to suffer mildest shock to output from Covid-19, OECD says
25 Warning of coronavirus risks over careless handling of shopping
26 Sky Sports customers set to save on bills until Premier League returns
27 Gerry Thornley: Changes to tackle laws could transform rugby by time of next World Cup
28 10 hilarious Irish comedy videos to watch on YouTube
29 Ah, 2008. At least back then you didn’t have to sit inside your negative equity property
30 Flu epidemic of 1918 warns us of coronavirus risk to frontline workers
31 Houseparty offers $1m bounty for proof of ‘commercial smear campaign’
32 ‘After Blackadder, for the first time in my life it was dead easy to get in the door’
33 Medics concerned some over-70s ‘don’t understand concept’ of cocooning
34 Covid-19: Teachers may be redeployed outside education sector
35 The Irishman living in lockdown in Madrid as it is brought to its knees by Covid-19
36 Jack Grealish needs to show that his remorse is real this time
37 Man with dementia and ‘plenty of money’ left in hospital for months
38 Banks warn of increase in online scams targeting Covid-19 concerns
39 Coronavirus: Nearly 600 prisoners released since start of outbreak
40 Paul Flynn: Here’s what happened when my kids took over our kitchen
Real news has value SUBSCRIBE