Ireland pull it out of the fire; Liverpool back on top 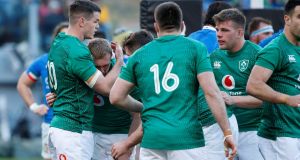 Ireland were forced into the trenches by Italy on Sunday. Photograph: Ciro De Luca/Reuters

Ireland were forced to pull it out of the fire to avoid leaving Rome in ruins yesterday evening, as Joe Schmidt’s team limped to a bonus point win over Italy after a very poor performance at the Stadio Olimpico. In his column this morning, Liam Toland explains that the win was no walk in the park as Italy force Ireland into the trenches: “the story of the day – being on the wrong wavelength. The lineout lifting pod and the hooker. The scrumhalf and the flying first receiver. The reshuffle of Keith Earls into midfield and yet more wavelengths eroding the famed Joe Schmidt attention to detail and the accuracy he requires.”

Liverpool returned to the top of the Premier League after a 0-0 draw with Manchester United at Old Trafford, a match which failed to ignite. United lost three players to injury in the first half, while Liverpool were forced to replace Roberto Firmino - and the flow of the game never recovered from the early disruptions. Manchester City meanwhile claimed the first silverware of the season with a penalty shootout win over Chelsea - the headlines after the match however were dominated by Chelsea goalkeeper Kepa Arrizabalaga. In extra-time at Wembley, Willy Caballero was prepared and ready to replace him for the shootout, but astonishingly Kepa just refused to leave the pitch.