Ireland head for Twickenham revived and rebooted; Tyrone hang on against Kerry 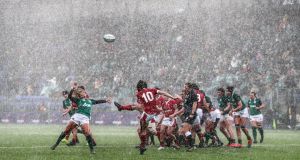 Ireland will head for Twickenham on Sunday week with a new spring in their step after Saturday’s Six Nations win over reigning champions Wales. With his team rebooted, revived and already seeking a Triple Crown, the clash will be a very special day for Andy Farrell, and another testing one for his wife, Colleen, given son Owen is the English captain. Looking back on the bonus-point win over Wales, Liam Toland (Subscriber Only) believes that denying Wales possession and kicking to gain distance were key to Ireland’s victory: “there’s a subtle difference over the week between Scotland and Wales, but a more obvious one over the year since Wales beat us to win the Grand Slam. Then Ireland (in the rain) ran 227 metres. They made an impressive 41 per cent increase last Saturday and once again, week on week, it is the Irish outside backs making the metres.” Ireland moved to the summit of the Women’s Six Nations Championship table after a 31-12 win over Wales in at times atrocious conditions at Donnybrook on Sunday.

Cathal McShane made his first appearance of 2020 as Tyrone overturned a four point half-time deficit, to edge Kerry by the minimum, in Sunday’s Division 1 league clash in Edendork. They were assisted by a Darren McCurry scoring masterclass, a strong wind at their backs, and the loss of Kerry captain and top scorer David Clifford to a red card. Mayo conjured a late 1-2 to save a match they appeared for a long time to be comfortably controlling, and extend Meath’s wait for a first win of the campaign. While in Letterkenny, Galway stormed back from the brink to overturn a seven-point deficit for a valuable away win over Donegal.