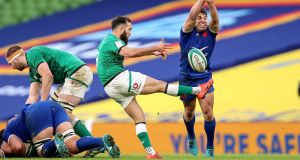 Ireland’s Six Nations title hopes are all but over, after they were beaten 15-13 by France in Dublin yesterday. Andy Farrell’s side were full of graft and endeavour at the Aviva Stadium but ultimately lacked the cutting edge to see off the tournament favourites, whose victory was orchestrated by the excellent Atoine Dupont. Things had looked ominous for Ireland when they fell 15-3 behind in the second-half, but a try by replacement hooker Ronan Kelleher brought them back into the game and they ended it on the ball, looking for a score. However it wasn’t enough, meaning they have lost their opening two Championship fixtures for the first time since the 1998 Five Nations. Afterwards Farrell said he was proud of his players but saw it as another missed opportunity: “Even though people were writing us off this week we never wrote ourselves off. The game was there to be won. It was a hard-fought contest but it’s one that slipped away from us at the end.” This was a view echoed by captain Iain Henderson, who lead with aplomb despite being forced off for a HIA after a nasty clash of heads with Cian Healy.

Head injuries have been a recurring theme of the opening two rounds of the tournament - something which John O’Sullivan has picked up on in his Six Nations talking points this morning. Ireland are now fifth bottom in the table with two bonus points to their name and take on Italy when the Championship resumes in a fortnight’s time. The Azzurri were beaten 41-18 by England in a messy affair at Twickenham on Saturday, while Wales made it two wins from two as they edged Scotland 25-24 at Murrayfield.