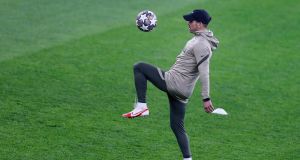 It may be something of a dead rubber in terms of the tournament but this Saturday’s clash with Italy in Rome is still of high importance for Andy Farrell and Ireland. It’s the classic lose-lose situation in that a win is expected and won’t raise much excitement but a loss, particularly at this stage, could start to raise serious questions. This morning Gerry Thornley writes in his column that Ireland must not underestimate their hosts who have shown “nough evidence in the two rounds so far to suggest that in some aspects of their attacking game Italy have been more inventive and ambitious than Ireland.” In the losses to France and Wales, Ireland’s seeming lack of attacking gameplan has come under fire and yesterday attack coach Mike Catt attempted to explain what the squad has been working on. Outside of the professional game, the schools’ cups should be in full flow at this time of the year but, much like everything else, they are on ice for the moment. In his column this morning Owen Doyle writes that for many, parents in particular, the schools’ cup of nightmares is not missed for one year given some of the unsavouriness around it as well as the spectre of concussion which is dominating all of rugby at the moment.

Moving to soccer and England is set for a packed summer of sport if Boris Johnson’s new Covid-19 roadmap goes to plan with all restrictions set to potentially be lifted on June 21st, paving the way for a mass return of crowds. Spectators are due to return to limited attendances from May 17th – including for the final day of the Premier League season – but sources indicate that the hope is for full stadiums as the summer progresses. Tonight, Chelsea meet Atlético Madrid in the Champions League last-16. Atlético have been in impressive form this season and the acquisition of Luis Suárez has proved to be extremely lucrative. Tonight Diego Simeone hopes he can maintain that form and find the net in Bucharest where the match will be played due to Covid-19 travel restrictions. In domestic matters, Vera Pauw yesterday signed a two-year contract extension as manager of the Ireland women’s team and the Dutch national is quietly confident that she can guide the team to a first ever World Cup in 2023.

11 Nanny state? After the mess here in Texas, I’d give my right arm to live in one

14 Barry Gibb: ‘My brothers had to deal with their demons, but my wife wasn’t going to have it’

15 Covid-19 vaccines: What’s going on and why are targets being missed?

22 Covid-19 Vaccine Tracker: What's available in the Republic of Ireland and what else is coming?

23 Long Covid in children: New data is cause for concern, scientists say

25 If people feel suicidal, fight their toxic belief that the world would be better without them

27 Loyalists and the Irish Sea border: ‘From what I’ve seen it’s all hyped up’

29 What a work-from-home space should cost: Converted attic, garden office or spare room

30 Gabriel Byrne on Weinstein: ‘He was a violent bully. He had such power’

31 Frost dispenses with the manual of diplomacy for NI protocol

36 Miriam Lord: The Bisto Kids get a taste of their own Davy gravy