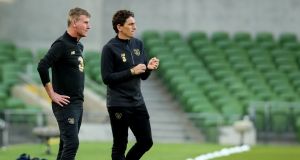 Republic of Ireland’s manager Stephen Kenny’s first home game ended in a 1-0 defeat to Finland in an empty Aviva Stadium, as Fredrik Jensen’s goal in the 63rd minute proved decisive. Kenny said that his selections had been “experimental” in both of his first games in charge and while he accepted that the results were disappointing he has, he says, got a better sense of his options for the Euro2020 playoff next month against Slovakia. Ken Early is analysing the defeat in his column this morning, focusing on Shane Duffy’s discomfort in a high defensive line and the team’s failure to create chances: “It turns out that watching Ireland struggle to create chances is more absorbing when there is no crowd noise to drown out the players’ shouts of striving and exhortation, which underline just how hard a team has to work to struggle to create chances at this level.”

Trailing by three points with 20 minutes to go, and with just eight points on the board, Ballyboden dug deep when it counted and drew on all their big-game experience to overwhelm Na Fianna, outscoring them 1-7 to 0-1 to ensure that the champions of 2018 and 2019 will contest this year’s Dublin hurling final. A goal from Seán Moran in the 49th minute proved crucial as Cuala beat Lucan Sarsfields by seven points in the other semi-final. In Tipperary Kiladangan progressed to a third senior hurling final in four years after seeing off a disappointing Drom and Inch by 1-21 to 0-9. They’ll face Loughmore/Castleiney on Sunday week after they overcame an under par Nenagh Éire Óg 1-21 to 1-11 on Saturday evening. In the Mayo football semi-finals Knockmore defeated Ballina by 0-17 to 0-13, while on Saturday Breaffy edged past Westport by 0-15 to 0-13. After another weekend of matches behind closed doors, Malachy Clerkin questions the cowardly Government hiding behind Nphet: “As a piece of political slipperiness, the Government’s ability to be in charge of everything right now without being to blame for anything is almost admirable.”

1 Graham Norton: ‘I wanted out, out, out of Ireland’
2 Speed and distance of Covid-19 droplets tracked by Mater researchers
3 Covid-19: Seventy cases in Cork traced to local pubs and restaurants in recent weeks
4 Eighteen revelations from a trove of Trump tax records
5 Olivia O’Leary: If you move to Carlow, there are things you’ll have to get used to
6 Hello Eir, is anybody there? Four unhappy customers complain
7 ‘I never suspected that, aged 29, I’d be lost’
8 Susie Dent: ‘Jimmy Carr is incredibly rude to me. I took it as a compliment’
9 Three Ireland switches on 5G network around the country
10 More than 30 people queue overnight to secure property in Carlow
11 The Secret Teacher: My students’ capacity to socially distance is worryingly low
12 AfD fires spokesman who favours ‘shooting or gassing’ migrants
13 Nurse who falsified prescriptions is struck off register by High Court
14 Covid-19: Possible extra restrictions for four counties to be decided by weekend
15 Ken Early: Handball ‘crisis’ a timely distraction from the grim bigger picture
16 Large sections of Garda to be disarmed following review
17 Donald Trump's taxes: US president paid $750 federal income tax the year he won the election
18 Thirteen men have begun training for or are considering priesthood
19 No joy for consumer with a faulty Husqvana chainsaw
20 Bus Éireann to shut many inter-city routes due to financial pressures
21 Positive omens for Kenny ahead of Ireland’s Slovakia clash
22 My cancer scare, the marathon and me
23 Prince: Sign O’ The Times reissue reveals a brilliant trove of unheard songs
24 Liverpool maintain perfect start with win over Arsenal
25 Donald Trump’s Irish and Scottish golf courses ‘reported losses of $63.6m’
26 Dublin Halloween festival cancelled due to Covid-19
27 Ireland’s travel green list reduces to four countries
28 The Offload: Springbok heavyweights heading for Pro14
29 High Court approves ECT treatment for elderly priest
30 Harry Crosbie puts family haulage business into liquidation after port dispute
31 Am I paying too much for my buy-to-let mortgage?
32 Gardaí seeking to track movements of man (48) prior to unexplained death
33 Are you a non-lying cheat or just radically dishonest?
34 The Irish Times view on Donald Trump’s taxes: an overdue lifting of the veil
35 UCD professor asked to resign from EU committee over Covid-19 claims
36 Coronavirus: Further 430 cases reported in State is most in a day since April
37 Almost 100 Leaving Cert students had six or more subject grades lowered
38 Joaquin Phoenix and Rooney Mara name their baby son River
39 Michael Harding: ‘Do I know anything? Very f**king little’
40 Trump and Biden prepare to face off in first presidential debate
Real news has value SUBSCRIBE