Injury-hit Ireland take on Poland; Dominic Ryan has done a service for Rugby 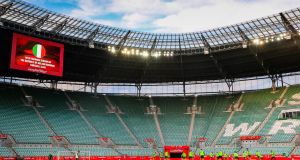 Ireland take on Poland tonight in the Stadion Miejski, with captain Seamus Coleman the latest squad member to be ruled out of the friendly by an injury. Ahead of the match - where Ireland will be hoping to avoid another morale sapping defeat - Martin O’Neill says he expects Roy Keane and Harry Arter to resolve their differences between now and next month. Click here for all of tonight’s international friendly match fixtures.

Tony Finau has been selected for the American Ryder Cup team as Jim Furyk’s final captain’s pick. He joins Tiger Woods, Phil Mickelson, and Bryson DeChambeau who were Furyk’s first three wildcard picks on September 4th - and with that the two squads are complete. Meanwhile Rory McIlroy was left to reflect on a closing round 68 that left him two shots outside of Monday’s BMW Championship playoff. Once again, McIlroy’s ice cold putter proved to be his enemy.

1 Coronavirus: One case confirmed in Northern Ireland
2 Orange weather alert issued as Storm Jorge set to batter Ireland
3 How well paid do you think you are? Here’s how to work it out
4 WHO warns against ‘fatal’ complacency in global coronavirus fight
5 What should you do if you think you might have coronavirus?
6 Predictions of ‘skin and hair flying’ as FG selects 13 of up to 60 Seanad hopefuls
7 ‘I woke up the next day in a guy’s house covered in bruises’
8 Both sides in talks on Britain’s future relationship with EU expect early bust-up
9 Coronavirus: What we know so far about how Ireland is affected
10 Life as a Facebook moderator: ‘People are awful. This is what my job has taught me’
11 Clonlara case study: ‘Who the hell gave planning down here, day one?’
12 Horse owners embarrassed ‘perfectly good’ stallion sent for slaughter, court told
13 Anne Harris: Sinn Féin has a real problem with contrition
14 Corona beer firm reeling after 8% slide due to coronavirus
15 Coronavirus: reinfection discovery may be blow to vaccine hopes
16 Cork grandmother goes on trial for felling Sitka spruce trees
17 Couple challenge decision over access to Killarney lake
18 Mass gatherings due to go ahead in Ireland amid coronavirus outbreak
19 We bought the house. Then its value plunged by almost €200,000
20 ‘Our Irish breakfast here isn’t quite as good as my mammy’s at home’
21 Number of people homeless rises sharply to top 10,270
22 Free for all: Irish tourist attractions to waive fees for first national Tourism Day
23 Soreness is good, scales are pointless: The 10 biggest myths in fitness
24 Dublin stabbing: Parking space was at centre of previous rows, gardaí told
25 No capacity in main Dublin hospitals for extra patients needing intensive care
26 Why you can’t publish a Weinstein #MeToo story in Ireland
27 What is coronavirus and what should I do if I have symptoms?
28 State would need 16 fighter jets for full air defence capability, expert says
29 5,000 people from 135 countries to become Irish citizens next week
30 AIB to sell more than 500 ATMs to Brink’s
31 Dublin's long-awaited Liffey cycle route to be in place by August
32 Wall Street hammered on coronavirus fears while Dublin dips 4%
33 Coronavirus: Woman tests positive for a second time in Japan
34 Sealing the deal: how to buy a house at the right price
35 Accumulated profits at Marian Finucane firm exceeded €830,000
36 Why Cork GAA is wrong to wrap €70 jersey around War of Independence
37 What’s so funny about philosophers?
38 Army reservists not fit enough for exercises, says general
39 ‘Look sexy. Look hot. Don’t be so provocative. You’re asking for it’
40 UK says it could abandon Brexit trade talks in June
Real news has value SUBSCRIBE