Heartbreak and Covid fiasco in Bratislava; discomfort of George Gibney story should be felt by all 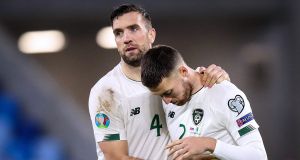 Well that was a heartbreaker, wasn’t it? After hitting the post and having a chance cleared off the line, Ireland’s Euro 2020 hopes were ended in Bratislava last night when Matt Doherty’s penalty came crashing back off the crossbar after a 0-0 draw with Slovakia. It was a cruel ending to what had been a positive night in just Stephen Kenny’s third match in charge but, ultimately, it means Dublin won’t be hosting any Ireland matches at next year’s rescheduled European Championships. A strange night began with a Covid-19 fiasco which saw Aaron Connolly and Adam Idah ruled out of the match at the 11th hour because they had been deemed close contacts of an FAI backroom staff member who tested positive for the virus. It later emerged that the positive case was a member of the non-football staff which has Ken Early questioning this morning whether this could have been avoided. “How players of this importance could have been exposed to this sort of contact is a mistake that becomes more astonishing the more you think about it. Say what you like about the FAI, they keep finding ways to amaze you,” he writes. Meanwhile, we also have Malachy Clerkin’s player ratings while Mary Hannigan writes that, watching on RTÉ, we wouldn’t have blinked if Michael Flatley suddenly tapped his way across the floor.

On to rugby and Gerry Thornley writes this morning that winds of change are in the air as Andy Farrell gathers his first Ireland squad. The Ireland head coach has picked six uncapped players in his squad with John Cooney one of the biggest surprises in the exclusions list. “Although that first game against Italy at the Aviva Stadium offers more scope for experimentation, the starting line-up especially and match-day 23 is liable to fall along familiar lines,” he writes.

1 Bodies of mother and two children removed from south Dublin house
2 Aldi, Lidl bow to pressure to ban non-essential ‘middle aisle’ sales
3 Cork shootings: Gardaí find lengthy apparent suicide note on one of the dead men
4 Medical gaslighting: The women not listened to or viewed as overdramatising or catastrophising
5 Michael Harding: Three reasons you’ll never see a cat in Donegal
6 Coronavirus: Six deaths and 675 further cases reported in Republic
7 Watching sport during lockdown may be bad for your health
8 Young homeless mother may have been dead in tent for a number of days
9 Two hundred Irish retailers for all your online Christmas shopping
10 Second-level teachers vote for industrial action over school safety and pay
11 Michael McDowell: We must check if this Covid-19 lockdown is really necessary
12 Mazda’s first EV requires mental recalibration
13 Johnny Ronan loses out on €315m Dublin docklands deal
14 Kanturk farm shootings: A timeline
15 Ciara Kelly: I was pregnant, unmarried, a junior doctor and I got old-school comments
16 Johnson’s Brexit Bill set to be blocked by House of Lords
17 Fast Donnybrook flip with all the work done for €625k
18 Six Nations - France v Ireland: Kick-off time, TV details, permutations, team news and more
19 Róisín Ingle: Five ways to find joy in a pandemic. Only one of them is illegal
20 Man jailed for role in ‘horrendous’ arson attack that left victim without ears
21 Nphet ‘not anticipating’ advising against schools reopening after midterm
22 Sinn Féin repays £30,000 given to ineligible NI offices in Covid-19 scheme
23 Champions Cup: Leinster look to have fared best in draw for new-look competition
24 School closures on the agenda following ASTI vote
25 Son (23) who died in suspected Cork murder-suicide was due to graduate
26 Dan Martin survives brutal Moncalvillo climb to finish third
27 Dutch lockdown extended ‘well into’ December as Covid-19 cases surge
28 Ryanair and Aer Lingus to cut further flights from regional airports
29 Back to brack: An easy Halloween bake
30 Europe paying ‘high price’ for relaxing too quickly
31 How one wine retailer and restauranteur pivoted during the pandemic
32 Suzanne Lynch’s US Election Diary: Trump seeks to hold onto midwest states
33 How Kim Kardashian West’s trip to a private island launched a thousand memes
34 Roscommon eviction trio not in contact with lawyers since release, court told
35 Testing and tracing: Figuring out what the numbers mean
36 Man jailed for five years for killing 7ft 5in Belarusian man
37 Inside Story by Martin Amis: An arrogant and long-winded mess
38 Bank of Ireland takes €169m charge for 1,700 job cuts
39 Germany to impose month-long partial lockdown from Monday
40 HSE apologises to 2,000 people asked to do their own contact tracing
Real news has value SUBSCRIBE