Gordon D’Arcy says it could get worse for Ireland; Liverpool steady ship in Europe 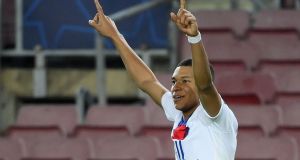 Ireland are licking their wounds entering the first fallow weekend of the 2021 Six Nations, with their next engagement away to Italy in Rome on February 27th. That fixture looks more dangerous than ever for Andy Farrell’s side following their opening round defeats to Wales and France - and in his column this morning Gordon D’Arcy suggests the game on Saturday week has “a wooden spoon vibe to it.” He writes: “I accepted a few weeks ago that this could become Ireland’s worst ever Six Nations. How low we go is now on the coaches. . . Ireland are stuck in the mud, not to mention injury ravaged after losing their opening two Six Nations games for the first time in their history.” So how can Ireland turn things around before they get even worse? He believes bulk and brains will be needed at the Stadio Olimpico: “Bring James Ryan and Ronán Kelleher into the team and all of a sudden it is a heavyweight pack. One the forward’s coach could put his name to. To ignore form will only open the management to accusations of blind loyalty and no coach will survive for long under that tag, not when they are losing. No contract is that cast iron.”

Liverpool put their wretched league form behind them last night as they ran out 2-0 winners against RB Leipzig in the first leg of their Champions League last-16 clash. Mohamed Salah and Sadio Mane were on the scoresheet in the away fixture, which was played in Budapest due to Covid-19 restrictions. In the night’s other match Kyllian Mbappe was the star as Paris Saint-Germain eviscerated Barcelona 4-1 in the Nou Camp, the 22-year-old scoring a stunning hat-trick on a night where Lionel Messi was virtually anonymous. Tonight’s fixtures see Porto play Juventus and Sevilla host Dortmund, meanwhile in the Premier League Fulham take on Burnley at Turf Moor (6pm) and Manchester City travel to Everton (8.15pm).

12 When a ‘good father’ decides to kill his whole family

17 Spring clean: 13 ways to spruce up your home – with or without a tradesperson

21 ‘We should have done better’: Cillian de Gascun, Paul Reid and Stephen Donnelly look back

22 Divers steal beer being aged by sunken ship off Argentina

35 Cliff Taylor: Finding an Irish solution to our Covid-19 problem

36 ‘There’s a slowness and lethargy in our children now, a low-level melancholy’