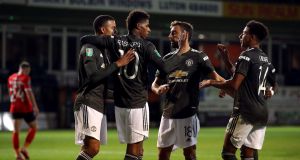 Marcus Rashford came off the bench to get Manchester United over the line at Luton last night. Photograph: PA

Following Leinster's Champions Cup defeat to Saracens, the next fear is that Ireland will be exposed in the same brutal fashion at an empty Twickenham on November 21st in a rivalry that has swung their way since February 2019. But in his column this morning, Gordon D’Arcy explains; “the ‘here we are again’ perspective after Leinster’s maul and scrum were dismantled presents a seemingly insurmountable problem for Irish rugby. I don’t buy that. There are multiple reasons for the season ending so abruptly last Saturday.” France’s successful bid for the 2023 Rugby World Cup, beating off competition from Ireland and South Africa, is understood to be part of the investigation by French financial police which led to the FFR president Bernard Laporte being called into their Parisian offices for questioning earlier on Tuesday. The organisers of the Pro14 will reveal the fixtures for the first 11 rounds of the 2020-21 campaign, which begins the weekend after next, this afternoon. In order to complete those fixtures, each squad will be obliged to travel separately from the general public, which will mean hiring private charters. Saracens flanker Michael Rhodes’s citing for headbutting Leinster centre Robbie Henshaw in their Champions Cup quarter-final match last Saturday has been dismissed, leaving him free to play in this weekend’s semi-final.

The Donegal SFC final between Naomh Conaill and Kilcar has been put postponed from next Sunday and will now go ahead in Ballybofey on Wednesday, October 7th. Kilcar confirmed on Monday that a member of their panel had returned a positive Covid-19 test, while the entire Donegal panel are in isolation after one of their squad also tested positive. There are eight players on the Donegal squad from the two county finalists. Tyrone midfielder Colm Cavanagh has announced his retirement from intercounty football, cutting the last link with the All-Ireland winning team of 2008. Seán Moran explains why the fallout from the Tyrone senior football final celebrations will concern the GAA: “this isn’t just a problem for Tyrone. What happened in Omagh was amplified by the social media pile-on but after an encouragingly efficient club season, the GAA has entered the period of county finals, where temperatures will run higher than in previous rounds.”

1 Large crowds gather on Dublin’s Grafton Street on eve of lockdown
2 One hundred Irish retailers for all your online Christmas shopping
3 Coronavirus: Three further deaths and 1,066 cases reported in Republic
4 Level 5 golf shutdown: Ireland one of few countries to close courses
5 Galway nursing home sees 26 out of 28 residents test positive for Covid-19
6 Body of woman and baby boy found in separate locations near Lucan
7 Life under Level 5: Where can I go, who can I see, what is closed and what is open?
8 Waterford woman accused of sharing pictures of boys who murdered Ana Kriégel
9 Lockdown meals: 50 great Irish restaurant food boxes to go
10 Borat 2: Rudy Giuliani’s trouser-reaching scene is the work of a daring young woman
11 Gym owner who planned to stay open changes mind after gardaí visit
12 Guinness brings out a non-alcoholic version of the black stuff
13 Thousands of gardaí mount checkpoints and patrol parks, beauty spots
14 My Irish passport has calmed tempers at borders and airports
15 How long can Government afford to keep State pension age at 66?
16 Developer’s impeccably restored Fitzwilliam Square Georgian for €3.5m
17 Why work more than 15 hours a week?
18 Mystery around Pope Francis’s backing for same-sex civil unions
19 International Dublin Literary Award: Anna Burns becomes first Irish woman to win €100,000 prize
20 ‘You guys are amazing’: Matt Damon’s message of support to Temple Street children, families and staff
21 On the Rocks: Bill Murray and Rashida Jones are perfect in Sofia Coppola’s latest film
22 Bus drivers faced ‘mayhem’ as passengers tried to travel, union says
23 Covid-19: Belgium’s foreign minister (45) in intensive care
24 Disappointment and frustration par for the courses as golf goes into lockdown
25 Dan Martin toasting another stage win at the Vuelta
26 Shock at golf clubs as sport faces shutdown in Level 5
27 John Gilligan arrested along with two others in southern Spain
28 Nearly 400 Brazilians have tested positive for Covid-19 in Ireland, data shows
29 Covid-19: Czechs enter new lockdown amid fears health system will collapse
30 Maxwell denied seeing Epstein involved in ‘inappropriate underage activities’
31 'You can’t see the waves coming' - crew describes dramatic rescue of ship off Irish coast
32 A further three deaths and 1,167 new Covid-19 cases reported in the Republic
33 ‘Rapidly accelerating volume of calls’ and lack of staff led to weekend collapse of Covid-19 tracing
34 Suzanne Lynch’s US Election Diary: Trump ready to go on the attack over Biden's son in final debate
35 Des Bishop apologises to Traveller community for comments in interview
36 What will €250,000 buy in Dublin 7 and Co Clare?
37 Covid-19: State moves to Level 5 for six weeks with hopes of ‘meaningful’ Christmas celebrations
38 Philip Reid: Hard to find the sense in closing golf clubs
39 Traffic light system for Covid detection to operate at Irish airports in November
40 Covid-19 restrictions in Europe: how does Ireland compare?
Real news has value SUBSCRIBE