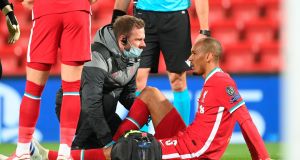 Both Ireland and France will head into Saturday’s Six Nations clash in Paris knowing exactly what they need to do in order to win the title, and both sides are likely to need to rack the points up in order to leapfrog England in the table. And, as Gordon D’Arcy writes this morning, a Halloween thriller could be on the cards at the Stade de France: “Have no doubt about it, this French side are capable of posting 40 on Ireland if we engage in a “you score, we score” battle of wills. But how else can Johnny Sexton’s team go about this task? The Six Nations trophy is for sale to the highest bidder in 2020. To go into the match with a patient, take-the-points attitude will result in Ireland finishing second in the table, at best.” Andy Farrell will announce his team for Paris later today with Robbie Henshaw likely to be the only change to the starting XV, in place of the injured Garry Ringrose. Opposite number Fabien Galthié will reveal his side at 10am (Irish time), with Teddy Thomas ruled out due to a hamstring injury.

Liverpool maintained their perfect start in the Champions League last night as they ran out 2-0 winners against FC Midtjylland thanks to goals from Diogo Jota and Mohamed Salah, however victory was marred by an injury to auxiliary centre-half Fabinho. Elsewhere Manchester City were 3-0 winners away to Marseille, Ferran Torres, Ilkay Gundogan and Raheem Sterling on the scoresheet. Tonight Manchester United welcome RB Leipzig to Old Trafford, with Chelsea taking on FC Krasnodar in Russia. Among tonight’s other games Barcelona travel to Turin to play Juventus, a day after president Josep María Bartomeu confirmed the club had agreed to proposals to join a European Super League - his last act before stepping down from the role.