Shane sets course record to a soundtrack of cheers and Olés 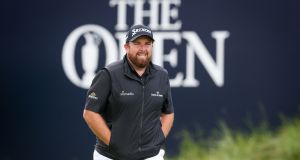 Shane Lowry at Royal Portrush Golf Club. His three-round total of 197 is the lowest in the history of the British Open. Photograph: Matt Mackey/Inpho

Shane Lowry’s 63, a course record, was a round for the ages. Cast in the role of a golfing troubadour he enchanted the galleries with the calibre of his game and they in turn serenaded the Irishman at every opportunity, a colourful, boisterous troupe that escorted him around the Dunluce Links at Royal Portrush.

The 32-year-old Clara native spreadeagled a field of lavish quality with a blemish-free round that contained eight birdies and 10 pars, taking him four shots clear, a number immediately traced to the 2016 US Open at Oakmont, where he enjoyed a similar advantage before ending up in a tie for second place.

Lowry, by his admission, is a different person, a different golfer. He is not tetraphobic – he led by four shots going into the final round in Abu Dhabi earlier this year – and isn’t afraid of ghosts so there was no reason to be spooked. He had accepted that the past can’t be altered, and his chance to win a Major lie rooted in the present.

And it was that space that he occupied for his 18 holes on Saturday, concentrating on the minutiae of constructing a round, never allowing his mind to drift, to a point where afterwards he conceded that he was slightly bemused by his achievement, one that he was struggling to process.

It was not as if he was oblivious to the soundtrack of his round, the din piercing and protracted when he hit a good shot interspersed with silence when he addressed the golf ball. Yet crucially he managed to control the adrenaline surges, harness them to his own end. Amongst the sea of faces was Monaghan footballer Conor McManus and actor James Nesbitt.

While Lee Westwood began his round with a three-birdie salvo in the first four holes, JB Holmes with two in three, Lowry’s was more prosaic, missing out on a commonplace birdie on the par-five second. Yet he responded by picking up his first birdie of the day on the par-three third hole with a nine iron to four feet. Tommy Fleetwood would eventually emerge as his closest pursuer.

Lowry picked up further birdies at the fifth (pitching wedge to six feet) and ninth (eight iron to 10 feet) to turn in 33 shots, and then on the 10th missed his first fairway, finishing in a grassy knoll and drawing a poor lie.

Following a conversation with caddie Brian Martin, Lowry chose a seven iron and played it beautifully, benefitting from a kindly bounce that sent the ball scuttling across the green to about six feet; he holed the birdie putt.

In the last eight holes Lowry demonstrated his short game sorcery on several occasions; his 60-yard lob wedge on the 17th that fed down the slope to within four feet arguably the bonniest.

On the 14th he had enjoyed a dollop of good fortune, his drive hitting a spectator when it appeared destined for knee-high fescue. He escaped with a par first and then from his nearest challengers on foot of three straight birdies.

The four iron to “Calamity” was a thing of beauty, covering the flag and roared up the hill as if it was an Irish Gold Cup winner at Cheltenham. Westwood, Holmes and Fleetwood took turns in pressing to narrow the gap, but the ebb and flow in scoreboard terms didn’t distract Lowry.

When he found the centre of the 18th fairway the wall of noise carried from the teeing ground to the green and back, a ripple effect. His second shot was measured beautifully, and the only remaining debating point was whether he would sign for a 62 or 63.

The preamble to that moment was the ovation he received from the grandstand that encircles the green, a chorus of Olé ringing out as the gallery rose to acknowledge his efforts.

He raised his cap and a grin before stalking the golf ball one final time. The birdie putt came up a roll short but no one quibbled; they knew what he witnessed.

His 63 was not the only landmark figure totted up on the day, the three-round total of 197 the lowest ever in the history of the British Open.

What was striking all the way around was the easy rapport with his caddie Brian Martin; serious when required, shooting the breeze about nothing and everything otherwise.

Lowry owes nothing to the past and everything to his future.