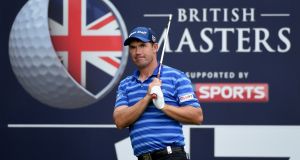 Pádraig Harrington in action during the first round of the British Masters at Woburn Golf Club. Photograph: Ross Kinnaird/Getty Images

Shane Lowry and Pádraig Harrington made strong starts to the British Masters after both carded opening five-under-par rounds of 66 to lie two shots off the lead at Woburn.

Lowry and Harrington were part of a six-strong group on five under, with Luke Donald a shot further back and a “nervous” tournament host Ian Poulter carding a 68.

Lowry carded five birdies in his bogey-free opening round, while Harrington made six birdies, with a single bogey on the ninth hole.

Fitzpatrick is in his first full season on the European Tour after coming through the qualifying school last November, but is currently 36th on the Race to Dubai after three top-three finishes in his last seven events.

“Same again this week would be lovely,” the 21-year-old former US Amateur champion said after his round. “It’s a great start today and I just need to keep working hard on my game.

“It was a tough start to the year and I missed a few cuts in a row, although I felt like I was playing all right, but now I am playing decent and getting the results I am looking for.

“I started hitting a fade in Switzerland (where he finished second) and maybe have a little bit more control over the ball now; the bad ones are not as destructive.”

The British Masters was last played in 2008, but has returned to the European Tour schedule with Poulter, Donald, Lee Westwood and Justin Rose taking turns to act as tournament host at different venues.

Donald is considering options including The Grove in Hertfordshire or links courses in the south east of England, while Westwood favours Close House in the north east. Rose is understood to be hosting the tournament at Walton Heath next year.

Warren had set the early target after making the most of new equipment and his opportunity to impress playing partner Darren Clarke, who will captain the European Ryder Cup team at Hazeltine next year. Sadly for the Dungannon man a three-over 74 left him well down the field.

“I like testing new equipment, but unless it’s absolutely right it doesn’t go in the bag,” Warren said. “I’ve used the same ball and irons for three years and the driver for a year, so this is rare for me.”

Poulter admitted he was nervous on the first tee as a large crowd took advantage of 15,000 free tickets offered by the tournament sponsor.

“That’s a feeling I have not had for a little while, but it was a nice feeling,” Poulter said. “It makes you focus, especially on a Thursday.

“I didn’t know what to expect coming into the week. There are big responsibilities, lots of things to do, lots of commitments. You have to manage those, but you can have the buzz on that first tee because you’ve spent a bit of time.”

Of the other Irish in action, Niall Kearney and Michael Hoey are two under, while Graeme McDowell made two birdies in his final three holes to finish with a one-under 70. Paul Dunne carded a level-par 71, with Damien Mc Grane a sgot further back.