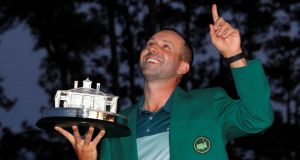 Sergio Garcia has hailed the influence of Seve Ballesteros and José María Olazábal after he broke his Major duck at Augusta. Photograph: Mike Segar/Reuters

Sergio García hailed the influence both of José María Olazábal and the late Seve Ballesteros after the Spaniard ended his 18-year wait to win a major championship with playoff success at the Masters. García saw off Justin Rose on the first sudden death hole at Augusta National to claim the Green Jacket amid highly charged scenes in Georgia.

On what would have been the 60th birthday of Ballesteros, a two time Masters champion, García sensed influence from above. Olazábal was Spain’s last winner here, in 1994 and 1999, and retains a close connection to the 37-year-old García. A maiden major triumph for García came at his 74th attempt and 71st in a row.

“It definitely popped in my mind a few times,” said García of the Ballesteros anniversary. “There’s no doubt about it. Obviously today a couple of times here and there. And I’m sure he helped a little bit with some of those shots or some of those putts.

“This is amazing. To do it on his 60th birthday and to join him and Olazábal, my two idols in golf my whole life, it’s something amazing. José sent me a text on Wednesday night telling me how much he believed in me. And what I needed to do, just pretty much to believe in myself. To be calm and not let things get to me that I’ve done in the past.

“José María’s message was very special because he’s my idol. He’s one; him and Seve are both my golfing idols since I was very, very little.

“Obviously he did mention a couple of things that did kind of touched my heart a little bit. He said, ‘I’m not sharing my Augusta locker at the moment, and I hope that I get to do it with you.’ So if the guys here wouldn’t mind putting me with José, it would be great.

“He’s a great man and we’ve had a great relationship for many, many years. To be able to join him and Seve as Masters champions from Spain, it’s unbelievable.”

García revealed he “felt very calm” before the 69 which tied Rose at nine under par. The winner had previously suffered major disappointments, most notably at Carnoustie in 2007 when a playoff capitulation handed Padraig Harrington The Open Championship.

“I think the problem was where my head was at sometimes. I did think about it: ‘am I ever going to win one?’ I’ve had so many good chances and either I lost them or someone has done something extraordinary to beat me. So it did cross my mind.

“But lately I’ve been getting some good help and I’ve been thinking a little bit differently a little bit more positive. And kind of accepting, too, that if it for whatever reason didn’t happen, my life is still going to go on. It’s not going to be a disaster. But it has happened.

“I have a beautiful life. Major or no major, I said it many, many times: I have an amazing life. I have so many people that care for me and love me and support me. I feel so nicely surrounded.

“Obviously this is something I wanted to do for a long time but it never felt like a horror movie. It felt like a little bit of a drama maybe, but obviously with a happy ending.”

García spoke of the warm embrace from Rose at the tournament climax. “It was very nice. We gave each other a big hug and he said ‘Nobody deserved it more than you do’. It was a great battle. He played awesome.”

The outpouring of congratulations towards García from fellow professionals was notable. None more so than in the case of Tiger Woods, who has endured a notoriously difficult relationship with the new Masters champion. Woods took to social media to hail a “well earned” Augusta success.

Whilst Rose admitted he will regard this major as “one that slipped by, for sure” he paid tribute to García. “Sergio is obviously the best player not to have won a major, no longer,” added the Englishman. “Any time one of those guys gets a monkey off their back I think that makes it a poignant major championship.

“We have played a lot of golf together since we were about 14 years old. We have always had a good friendship, a good camaraderie and a good rivalry. He was always happy for me and it must be hard for guys when they are striving to win majors but see their peers pick them off. They maybe feel left behind.

“It is nice for him now to have that monkey off his back and I am very pleased for him.”

Rose immediately set his own sights on future success, including at Augusta. “This is going to sting but I really feel like this is a tournament that I can still go on to win,” he said.

“I have plenty more looks. I would like to win three or four Green Jackets but one would be enough. I just want to win here.