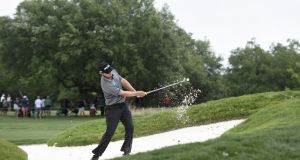 Seámus Power plays a bunker shot during the second round of the Wells Fargo Championship in Willmington, North Carolina. Photo: Getty Images

Séamus Power held his nerve in tough North Carolina conditions to remain right in contention at the Wells Fargo Championship, with half of the field still in the early stages of their second round due to a weather delay.

The Waterford golfer led for much of the second round as the players battled against strong winds, following an overnight storm which delayed the start of play.

Birdies at the fourth and the sixth sent the 30-year-old to the top of the leaderboard at six under.

However, conditions dictated that it was always going to be a day for patience and Power showed much of the maturity that he has gained already during his rookie season on the PGA Tour by not letting it get to him.

A bogey at the ninth saw him slip back behind Grayson Murray at the top of the leaderboard but he regained his good play to pick up shots at the 12th and 14th which saw him, briefly, take sole possession of the lead.

However, he will be a somewhat disappointed with a finish which saw him drop shots at the 15th and 17th but a good up and down at the final hole ensured it wouldn’t get any worse.

It all added up to a one under par round of 71 – no mean feat on such a tough day – and leaves him tied for the lead with Billy Hurley III and Francesco Molinari, although the Italian has played just three holes after the inclement weather delayed tee times by three hours.

While half of the field will have to return on Saturday morning to complete their second rounds, Graeme McDowell was one of the lucky ones after he fired a second consecutive 71 to ensure a lie in before the third round.

Meanwhile, Shane Lowry looks to be in need of a miracle after he carded two bogeys in his opening six holes to slip back to five over par, four shots outside the projected cut mark.