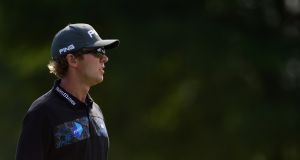 Seamus Power during his first round at the Wells Fargo Championship in North Carolina. Photograph: Getty Images

Billy Hurley III and Seamus Power are the clubhouse leaders after the second round of the weather-affected Wells Fargo Championship.

After heavy overnight rain caused a three-hour delay, Hurley III fired a three-under-par 69 while Irishman Power carded a 71 as both men sit on five under.

Starting on hole 10, the American Hurley III made the turn on level par for the round but turned up the heat with four birdies in his final seven holes.

Power was in a good position to be sole leader but he bogeyed holes 15 and 17 as his round finish in disappointment.

John Peterson and first-round leader Francesco Molinari are also on five-under but they have their round to finish on Saturday after darkness brought a close to play just after 8pm local time.

Spain’s Jon Rahm is one of five men on four under who have completed the round after he shot 71 in testing conditions.

Graeme McDowell is tied 23rd after two consecutive 71s, while Shane Lowry is flirting dangerously with the cut mark - he sits at one over par with three holes of his second round still to play.

World number one Dustin Johnson, making his comeback from a back injury which curtailed his shot at winning the Masters last month, is on even par after 13 holes, two over for the round.