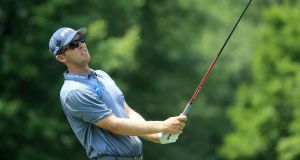 Séamus Power could do with a strong finish this week at the John Deere Classic to pull himself up the FedEx Cup rankings. Photo: Sam Greenwood/Getty Images

Steve Wheatcroft used a late flurry of birdies to grab the first-round lead at the John Deere Classic in Silvis, Illinois on Thursday as the American journeyman boosted his hopes of booking a last-minute ticket to the British Open.

Wheatcroft capped a bogey-free round at the TPC Deere Run with six consecutive birdies for a sparkling nine-under-par 62 that was his lowest round of the season and took him one shot clear of compatriot Michael Kim.

The 40-year-old was three-under after completing the par-five 10th, where he made his third birdie of the day, but kicked into another gear from the par-four 13th, where he stuck his 129-yard approach shot to within six feet.

“I wanted to just go to the first tee and start the second round,” the world number 927 told reporters after his spectacular seven-under-par back nine.

Ireland’s Séamus Power is looking for a boost up the FedEx Cup rankings as he battles to keep his tour card for next season. The Waterford man is currently right on the bubble at 125th in the standings with the top 125 keeping their cards so he could do with some good form and a steady opening round of 68, which included four birdies and just one bogey, puts him in a position to do that at three under par.

Wheatcroft, whose best finish so far this season was a share of 28th at the Corales Punta Cana Resort & Club Championship, went out early and took advantage of ideal scoring conditions on a soft course with almost no wind.

He will now try to convert his hot start into a spot at next week’s British Open at Carnoustie, which invites this week’s highest finisher who has not already qualified, provided the player ends the event among the tournament’s top-five.

“It’s been a brutal year, to be honest with you,” Wheatcroft added. “It’s probably the worst year I’ve had so far, but I don’t feel like I’m playing the worst golf of my career.

“I actually feel like I’m playing some good golf, I’m just not getting the results out of it.”

South Korean Kim Whee, a late starter who began his round on the back nine, was just a shot off the pace with two holes to play but finished with consecutive bogeys to sign for a six-under par 65.

Meanwhile, defending champion Bryson DeChambeau, playing for the first time since being barred from using a compass to determine pin locations, withdrew with an apparent right shoulder injury late in his round.

DeChambeau, who at world number 22 is the second highest-ranked player in a field missing a host of big names preparing for Carnoustie, struggled early and was three-over for the tournament when he withdrew on the 16th hole.

“On (hole) two I hit the shot out of the rough on the right, and I just didn’t feel great after that,” DeChambeau, with his right shoulder in a large wrap, told reporters.

“I probably overloaded the muscle, my delt (deltoid). And that’s something I’ve got to work on in the future, get it a little stronger so that stuff doesn’t happen.”

Twice major champion Zach Johnson, who has top-five finishes in seven of the last nine editions of the event, was seven shots back of Wheatcroft in a share of 56th place after mixing three bogeys with five birdies for a two-under 69.