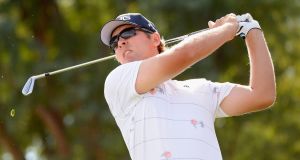 Séamus Power endured a marathon 36-hole day at US Open qualifying on Monday, eventually having to return to the course on Tuesday morning to play off for an alternate’s spot which the Waterford man secured.

While his place at Shinnecock Hill depends on others pulling out he may just have hit a run of form which saw him take the lead during the opening day at the FedEx St Jude Classic in Memphis thanks to a round of 65.

Currently outside the top-125 in the FedEx Cup rankings (Power sits 129th) which could secure his card for next season, the 31-year-old hit the ground running in Tennessee with three birdies in his first five holes only offset slightly by a bogey at the fourth.

The Waterford golfer got within the fringes of contention on a number of occasions in his debut season last year but never quite got the job done, eventually having to regain his card through the Web.com Tour finals.

With a field boasting the likes of Dustin Johnson and defending US Open champion Brooks Koepka, the St Jude Classic is no small-time event on the PGA Tour and a high finish would be a major boost for Power. On the back nine the former Irish Olympian was flawless, carding three birdies and six pars on his way to his 65 – topped off with an approach knocked in stone dead at the 18th for a tap-in birdie.

Also out early on Thursday was Pádraig Harrington who had moved himself into a tie for the lead with two holes to play before making bogey at the 17th and 18th to sign for a 68 and two under par. Harrington will miss the US Open next week for the fifth year in a row after failing to qualify but the same cannot be said for Shane Lowry who did secure his place on Monday but suffered a frustrating opening day in Memphis.

After getting to one under through 12 holes, Lowry went through a run of bogey, double bogey, bogey before a birdie at the 16th contributed to a final total of 72, two over par.

Power leads by one from a host of players including Koepka and Phil Mickelson who next week will partner Rory McIlroy and Jordan Spieth in the opening two rounds at Shinnecock Hills as he looks for the elusive US Open title which would secure the career grand slam.

First round scores from FedEx St Jude Classic on the PGA Tour (Irish in bold, par 70)