Pádraig Harrington well off the pace after opening 74 in Mexico 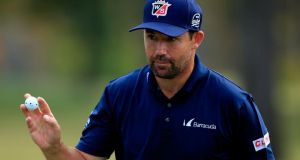 A run of five dropped shots in five holes saw Pádraig Harrington’s promising start to the OHL Classic go south as he carded a three-over 74 in Playa del Carmen, Mexico.

Birdies at the fifth and 11th holes got Harrington to two under in the PGA Tour event, but his problems started at the 12th with a bogey five and followed on the par-five 13th when a dropped shot saw him run up a double-bogey seven.

He made a par on the 14th, but back-to-back bogeys on the 15th and 16th saw him go out to three over and that’s where he finished.

That leaves the two-time Major winner nine shots off the lead off the early clubhouse lead of six under, which is held by a six-strong group of American golfers including Will MacKenzie and Robert Garrigus.