Pádraig Harrington two off the lead in Prague after opening 66 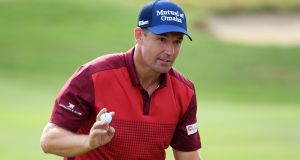 Ireland’s Pádraig Harrington acknowledges the crowd on the 12th green during the first round of the D+D REAL Czech Masters at Albatross Golf Resort in Prague, Czech Republic. Photograph: Ross Kinnaird/Getty Images

Pádraig Harrington made an encouraging start to the Czech Masters in Prague on Thursday, carding a bogey-free six-under 66 to sit two shots off the lead.

Harrington, who lost his PGA Tour card last week, reached the turn in two under after birdies on the par-five first hole and another at the sixth. He made a brilliant start to his run for home, reeling off four straight birdies from the 10th hole before making pars at the last five holes as he took a share of 10th spot.

Playing alongside vice-captain Harrington, Pieters carded a flawless 64 to share the lead on eight under par with Daly, England’s Callum Tarren and Malaysia’s Gavin Green.

And Pepperell, who needs to win in Prague to have a chance of moving into the final automatic place for Thomas Bjorn’s European team, was just two shots off the pace after firing seven birdies and a solitary bogey in his 66.

Pieters won a record four points on his Ryder Cup debut at Hazeltine in 2016 after being given a wild card by captain Darren Clarke following a runners-up finish in Prague and victory in Denmark the following week.

“I’d rather go one better here and then do the same next week but I’m going to worry about tomorrow first and then Saturday, a day at a time,” the 26-year-old said.

“I drove it pretty well and I putted really nicely. I’m just keeping going whatever I had going in America [where he was sixth in the US PGA] and I’m happy with the start.”

While Pieters definitely has to rely upon a wild card, Pepperell can force his way into the automatic places with a second win of the season, although the 27-year-old Englishman was typically self-deprecating about his chances.

“Apparently I could be close to the Ryder Cup team, but it’s not something I’m focused on,” Pepperell said.

“If I hit a bad six iron then I’m so angry with that that the Ryder Cup is well out of the mind, but that’s a good thing that I’m like that right now and I intend it to stay that way.

“I don’t feel any extra pressure, I’m sure Thomas doesn’t want me on his team!

Usually I’m a slow starter so to have given myself something to build on this early in the week is pleasing.“

Daly won the 1991 US PGA and 1995 British Open, but the 52-year-old sponsor’s invite is currently ranked 1,430th in the world after an injury-plagued season.

“It’s been one of those years where I’ve been hitting it really good, I’ve just been injured and having to pull out,” said Daly, who missed the Open at Carnoustie due to a knee injury.

“I don’t feel great but I got around today and I just played solid golf and it’s great. Every time you get a chance to hit something in there close it really makes you feel good.

“It was a very comfortable swinging round today and if I can do that every day, the injuries don’t tend to hurt as much.”

Gavin Moynihan fought back from a one-over front nine to card a two-under 70 thanks to three birdies on his back nine, while Paul McBride has work to do to make the cut after carding a level-par 72.

Séamus Power took the final spot in the field for the opening FedEx Playoffs event and opened up with a level-par 71 at the Northern Trust in New Jersey on Thursday.

That left the Waterford man five shots off the early clubhouse leaders at Ridgewood Country Club, with the American trio of Kevin Tway, Jamie Lovemark and Vaughn Taylor all carding five-under rounds of 66.

US PGA champion Brooks Koepka and world number one Dustin Johnson and England’s Tommy Fleetwood are all one shot off the pace.

(Britain and Ireland unless stated, par 72, (a) demotes amateur)