Irish golfer cards 65 to move into a share of 15th position; Daniel Berger leads by three 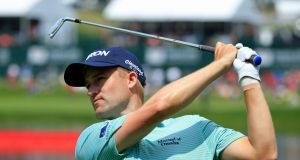 Russell Knox of Scotland plays his tee shot on the the 16th during the third round of the Travelers Championship at TPC River Highlands in Cromwell, Connecticut. Photograph: Michael Cohen/Getty Images

Pádraig Harrington will look to continue his rise up the FedEx rankings ahead of the playoffs in the final round of the Travels Championship in Connecticut after carding a five-under 65 to move to six under after the third round.

Harrington, who will compete at the Olympic games next week, started the week in 129th position in the standings, with the top 125 teeing it up at The Barclays at Bethpage Black at the end of August, the first of four playoff tournaments.

The field went out early in three-balls due to an approaching storm, with Harrington playing with America’s Hunter Mahan and South Korea’s Seung-Yul Noh.

Starting from the 10th hole, Harrington would drop a shot at the par-5 13th after finding water off the tee box. It would be his only dropped shot as birdies on the 15th and 18th got him under par for his round as he turned in 34 shots.

A purple patch saw Harrington string together a hat-trick of gains from the third and a closing birdie on the ninth completed a fine day’s work as he moved up into a share of 15th position .

American Daniel Berger moved within sight of his second victory in two months when he opened a three-shot lead over the field.

Berger, last season’s rookie of the year on the PGA Tour, picked up nine birdies to surge clear with an eight-under-par 62 at the TPC River Highlands.

Low scores were plentiful on a day when Ernie Els made his first ace on the PGA Tour since 2004, using a seven-iron from 171 yards at the 16th.

“I made a bunch of putts and that’s what it takes to shoot a low number out here,” world number 40 Berger told PGATour.com.

“It didn’t really feel like I was that many under par until I looked at my scorecard walking down the 18th hole but sometimes it happens like that.

“I’m striking it really well, driving it well and that’s going to be a big key tomorrow.”

Berger, who won the St Jude Classic in June, was not the only player to go low.

Knox adopted a simple attitude and it paid off with birdies at the first three holes.

“Aim at the pin, you might hit it there,” said the Scottish winner of the WGC-HSBC Champions event in Shanghai in November.

“I played beautifully. I had loads of chances, obviously made some, which was great, missed a couple.”

Van Aswegen hit back well after dropping a stroke at the first.

“I started off real nervous,” he said. “I wasn’t feeling too good after that bogey but settled down, found a good rhythm and made some birdies coming in. Hopefully tomorrow I can find a rhythm a little earlier.”

Fellow South African Els ended the day tied for 60th but the hole-in-one was a nice consolation for the four-times major winner.

“You hit a lot of good shots but rarely do they go in,” he said. “It was a real thrill.

“All of us, from the 24-handicapper to the pro, it’s a great feeling, a feeling of elation.

“I think everybody feels the same way. When the ball goes in we’re all kind of surprised.”