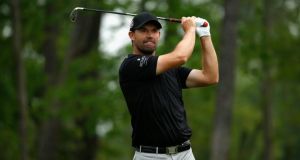 Pádraig Harrington watches his tee shot on the ninth hole at the Houston Open at the Golf Club of Houston in Humble, Texas. Photograph: Scott Halleran/Getty Images

Three-time major winner Padraig Harrington kept his faint hopes of qualifying for next week’s US Masters alive with an opening 69 in the Shell Houston Open.

Harrington has to win on Sunday to avoid missing out on a trip to Augusta for the first time since 1999 and got off to an encouraging start at the Golf Club of Houston.

The 42-year-old Dubliner started on the 10th and holed from eight feet for an opening birdie before picking up another shot on the par-five 13th.

Harrington dropped a shot on the next after failing to get up and down from a greenside bunker but quickly made amends with birdies on the 17th and 18th to reach the turn in 33.

A three-putt bogey on the third halted the former Ryder Cup star’s momentum, but birdies on the fourth and sixth had him high on the leaderboard before a disappointing bogey on the ninth, his final hole.

At three under par, Harrington — whose last victory on a major tour came in the 2008 US PGA Championship — was three shots behind early clubhouse leaders Keegan Bradley and Matt Kuchar.

Flawless
Bradley, who won the US PGA in 2011, carded six birdies in a flawless 66 that was matched by Kuchar in the group behind, the world number 11 missing from seven feet for birdie on his final hole to take the outright lead.

Bradley’s playing partners Webb Simpson and Phil Mickelson were also off to a good start, the pair returning rounds of 68 to join South African Ernie Els on four under par.

Open champion Mickelson had been a doubt for the event with a pulled muscle which forced him out of the Valero Texas Open last week, but the left-hander showed no ill effects as he carded four birdies and no bogeys.

Els looked set to finish five under but dropped his only shot of the day on the 18th after twice finding sand.

Sweden’s Henrik Stenson, who can replace the injured Tiger Woods as world number one with a victory in Houston, was five off the lead after a one-under-par 71.

Rory McIlroy was two under par through 16 holes of his opening round with four birdies and two bogeys but it could have been much better as he missed good chances at the opening three holes.

By contrast Darren Clarke was three over after his front nine.