Pádraig Harrington shakes off injury to fly high at Riviera 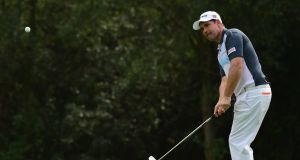 Pádraig Harrington of Ireland plays a chip on the 12th hole during the first round at the Genesis Open at Riviera Country Club in Pacific Palisades, California. Photo: Harry How/Getty Images

Despite an 11th hour decision as to whether or not he would play at the Genesis Open, Pádraig Harrington shot a much-needed round of 67 to shoot up the leaderboard.

That leaves him at four under par, three shots behind early leader Sam Saunders – the grandson of the late Arnold Palmer.

The Dubliner went into the tournament at Riviera in Los Angeles unsure as to whether or not he would be fit to play due to a shoulder injury which had plagued him at Pebble Beach last week and Torrey Pines the week before.

However, there were few problems in a round which saw him card five birdies and a bogey to sit within touching distance of the 29-year-old Saunders who has made just one cut in four events so far this season.

The three-time major winner would also be entitled to feel a little disappointed after he failed to birdie two of the three par fives.

As it was he picked up his shots on the par fours seventh and 10th before blitzing the final three holes with three birdies in a row to card his best round of the year so far.

Heavy early morning fog delayed play for an hour but, once it cleared, it yielded scorable conditions for a strong field in the final leg of the early-season west coast swing.

US Open champion Dustin Johnson made a fine start to his bid to end the weekend as world number one by firing a first-round 66.

Johnson reached the clubhouse on five-under par, two shots off the lead, as he chases a victory that could see him leap from third to first in the rankings.

For that to happen, current number one Jason Day has to finish worse than a three-way tie for third — and the Australian ended day one down in joint 74th, sitting on level par through 16 holes as darkness suspended play early in California.

Japan’s Hideki Matsuyama is also in with a shout of being world number one on Sunday evening, but needs to win while Day finishes lower than 24th.

And Matsuyama — who was in the same group as Day for the opening round — lies one-under par after 16 holes, six shots adrift of Saunders.

He overcame being stung by a bee on the first to gain further shots on the second and third but his only blemish of the day then came on the par-three fourth.

The American told pgatour.com: “I missed a pretty easy par putt on the fourth but I played really solid all day long.

“It would be great to get (number one) but I’m focused on this week. I just want to put myself in a position to have a chance to win on Sunday. That’s the only thing I’m really thinking about.”

Day struggled at Riviera Country Club, dropping shots at the fourth, eighth, ninth and 12th to cancel out gains on the first, sixth, 11th and 15th.

Matsuyama birdied the seventh but dropped a shot on the 10th, before ending his day with a gain on the 16th just before play was suspended.

The duo are scheduled to return early on Friday to complete their round after fog caused early delays in Pacific Palisades.

Once the fog lifted, the players enjoyed ideal conditions and Saunders took advantage with a flawless seven-under 64 as he chases a maiden PGA Tour win.

Harrington is a further shot back, joined on four under by Phil Mickelson.

Making his first appearance on the PGA Tour this season, Graeme McDowell shot a two under par 69, while Shane Lowry was three over par with two holes remaining, when play was suspended.