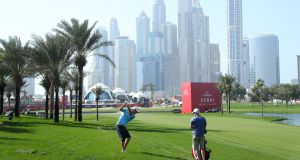 Pádraig Harrington plays in the pro am ahead of the Omega Dubai Desert Classic at Emirates Golf Club. Photo: Warren Little/Getty Images

With the Ryder Cup already pushed back a year, Europe’s captain Pádraig Harrington is insistent that there is no “wiggle room” left and that the rescheduled match at Whistling Straits in Wisconsin in September must go ahead, with or without fans.

Postponed last year due to the impact of Covid-19 and a reluctance to proceed without fans on site, Harrington – playing in the Dubai Desert Classic on the European Tour this week, where he will again run an eye over up-and-coming and potential team players, grouped with rising French star Antoine Rozner and Austrian Matthias Schwab – has continued his preparations as best he can.

“I’m certainly no scientist, you just can’t predict what it’s going to be like in September . . . I think the only thing I can do as a Ryder Cup captain is prepare myself and my team as best as I can with the idea that it’s full steam ahead. The European Tour Ryder Cup and the PGA of America will do the planning for all contingencies. But, as captain, it’s above my pay grade and it’s just about getting my team ready.

“There’s no doubt there’s going to be a Ryder Cup this year . . . within all reason, the Ryder Cup will be played and I suspect because of it being later in the year, being after the summer, that it could be close to normal in some sense . . . I don’t believe there is wiggle room for pushing this back. It’s full steam ahead. I suppose I could have said the same thing this time last year; certainly March last time, we were planning to go full steam ahead and deal with all contingencies as they came along. We are in the same boat now, but I’m an optimist, and I believe we will be good to go in a capacity for sure that the players will want to be there and enjoy it.”

Harrington’s proposal to adapt the European qualifying system to give added weight to tournaments as the season progresses has been adopted and the Dubliner, too, believes that the extra year in the qualifying process could herald a new dawning for younger players to break through.

“As regards to age of players, yeah, an extra year is going to be a year too far for some of the older guys. There is a little bit of a changing of the guard. I am looking forward to seeing a few rookies come through in the next eight months and set themselves out as the new stars,” said Harrington who, in tandem with Robert Karlsson, one of his confirmed vice-captains, has worked with the European Tour to ensure they get to play with some of those potential younger players at events.

And Harrington believes he has made the right decision in not increasing the number of wild card picks available to him: “You’ve got to give the rookies a chance to qualify. You’ve got to give them a fair crack of the whip. Everybody who is on the European Tour who is eligible feels like, ‘hey, I have a chance of making this team’. And that’s very important for the morale of the team; that everybody feels they are part of it, and giving me six picks would have given me a hell of a headache. I just don’t think it would help the morale of the team.”

Harrington has only selected two vice-captains – Karlsson and Luke Donald – so far, but is intent on giving others the chance to play their way onto the team before making further picks. One of those battling to qualify is Graeme McDowell who perhaps has the secondary option of being one of Harringtons’ understudies as he was to Thomas Bjorn in Paris in 2018.

“I think what he does bring is he’s well respected by his peers, and I think that’s very important. You could give Graeme a job and he’d be well capable of looking after players, and the players will be very happy with him being their go-to guy, a kind of mentor-ish role. So he’s strong in all departments when it comes to that because he does have the respect of the players,” said Harrington of McDowell, who is also playing in Dubai in his bid to improve his qualifying chances.

Andy Farrell happy with how IRFU contracts have so far been handled 05:00
Chelsea win at Liverpool to move into top four 22:31
No one is likely to be satisfied by the punishment Gordon Elliott receives 22:30
Rare display of frustration precedes fireworks for McIlroy 21:28
Andrew Coscoran and Paul Robinson into 1,500m final 21:07
Here is your handy guide to sport on television this week