Pádraig Harrington off to a flyer in Turkey 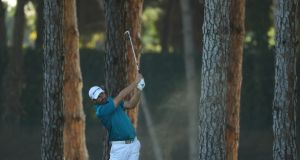 Pádraig Harrington hits his second shot on the first hole during the first round of the Turkish Airlines Open at the Regnum Carya Golf & Spa Resort in Antalya, Turkey. Photograph: Richard Heathcote/Getty Images

A blast from the past whistled through the pine trees as the first round of the Turkish Airlines Open brought a reminder of Pádraig Harrington’s prowess. As Shane Lowry stood over a bogey putt on the 18th green here at Regnum Carya, his eye caught the unmistakable strut of the three-time Major champion making his way down the adjoining 16th fairway.

“It wouldn’t surprise you what he does,” grinned Lowry of his fellow-Irishman’s potential to contend and even win here.

Indeed, Harrington – who’d engaged himself on the range before his round by drilling drives through the narrow gap between two pine trees – was chilled and relaxed as he went about his business, opening with a six-under-par 65 that left him just one stroke off the leaders.

Harrington’s place in the field only came through the courtesy of a sponsor’s invitation, as did his spot in next week’s Nedbank Championship. Although any prizemoney earned won’t count towards the Race to Dubai, the money – sizeable pots – will count towards the Europe Ryder Cup qualifying. And that is something that grabs his fancy, the chance of again playing rather than filling a vice-captaincy role as he did at Gleneagles in 2014 and Hazeltine in 2016.

“The reason I am here is because if you win one of these two events it puts you under a bit of pressure as in you’re going to be right there for the Ryder Cup,” said Harrington.

“To be honest, if I won one of these two events it would change my schedule for next year. It would mean a huge focus, because winning means you’d have a great chance of making the team. It kind of would be in your own hands if you got a good start [to qualifying] and that’s why I am here, knock one of these off and there’s such big points that it puts you in a good position to make the team.”

Harrington and captain Thomas Bjorn have soldiered together on tour for two decades, and the talk between them – so far – has been of the encouraging kind. “He has been very polite as Darren [Clarke] was and not coming and talking to me like a vice [captain], leaving him believe I am still a player. In another two months three months, six months time maybe, that conversation will start changing.”

And Harrington isn’t under any illusions about how hard the task is to qualify for the Ryder Cup. As he observed: “It is really tough to make the team especially when you are playing that mixed schedule over in the states and I’m not in the bigger events . . . you are hoping you have that special year. Now I might be resigned to the fact it is more about playing the right amount of tournaments and still need to play well and to get lucky to do it. I do mean that. To be in the top eight players or the top four on the money or top four in the rankings you have got to play some golf for the year.”

On the evidence of the first round, Harrington – with all aspects of his game in good shape – would seem to be in a great place with his game and his head. In shooting a 65, he finished just one stroke adrift of the trio of leaders – Haydn Porteous, Nicolas Colsearts and Joost Luiten – while Paul Dunne (67) and Lowry (68) also manoeuvred into challenging positions.

Harrington’s bogey-free round featured six birdies – three in four holes from the fourth to the seventh, and a similar dividend on the homeward run from the 11th to 14th – which he attributed to a pre-tournament holiday at the renovated Adare Manor. “Something has me a little less stressed,” he confessed of the good vibes that he brought with him here.

Certainly, Harrington strutted about the place like his old self, those neck and elbow injuries consigned to the past. “I played nicely, didn’t really get in trouble at any stage during the day, wasn’t really out of position. It was a pretty easy six-under par, I wish they were all like that.”

It was a productive day all round for the three Irish players in the field, even if late bogeys – at the 17th for Dunne and on the 18th for Lowry, after his three-wood tee-shot veered left into the lake – took a little of the gloss off things.

“I spent a lot of time on the range the past few days working on my game, so it was nice to get out onto the course competitively and to shoot a decent score. Hopefully I can keep improving on this every day,” said Dunne, who finished the day in a share of 10th place.

For Lowry, there was also a good vibe. “These are the types of events where you don’t want to be chasing early, because the scoring is going to be good. You want to get off to a decent start. I’m not too far behind. If I keep playing like that, I can shoot good scores. I’ll just keep going, do what I do,” said Lowry, in tied-14th.

Lowry was grouped with Ryder Cup captain Bjorn in the first round but the Dane insisted it was just “luck of the draw” and there was no other agenda. “I can’t play on my own,” he quipped, whilst outlining his view that Paul Casey, who has retaken up European Tour membership, won’t have any divine right to place on the team for Paris next year.

Gianluigi Buffon at 43: why messing up is key and what makes him happy 09:39
Manchester City go 15 points clear; Gordon D’Arcy on what we can learn from Italy win 07:36
Gordon D’Arcy: Ireland merely picked through the carcass of Italian rugby 06:00
Munster looking to drive home their advantage on Thomond Park run-in 06:00
Connacht know any chance of catching Munster requires Thomond triumph 06:00
Here is your handy guide to sport on television this week