Pádraig Harrington hot out of the blocks in Bermuda 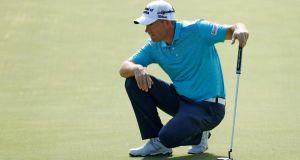 Ireland’s Pádraig Harrington lines up a putt on the 18th green during the first round of the Bermuda Championship at Port Royal Golf Course in Southampton, Bermuda. Photograph: Gregory Shamus/Getty Images

There’s life in the old dog yet and all of that. Pádraig Harrington, at the ripe age of 49, rolled back the years to fashion a fine opening round of four-under-par 67 in the Bermuda Championship at Port Royal Golf Club, rekindling memories of his last foray on the Robert Trent Jones-designed clifftop course where the Dubliner won the PGA Grand Slam event back in 2013.

Escaping lockdown at home to take in back-to-back tournaments on the PGA Tour for the first time since March, Harrington – who is also in the field for next week’s Houston Open – manufactured a round of six birdies and two bogeys to jump straight into contention on the island paradise.

“To win a golf tournament, it requires certain things to fall into place; breaks, this, that and the other. So, actually winning, that’s clearly outside your hands. All I need to know is that the game I’m playing, if things fall into place, I can win with. I spent the last couple of years struggling on cut lines. Now, I feel like I can be patient and still be in contention on Sunday,” said Harrington, who sharpened his game with a number of late-season appearances on the European Tour, including a top-10 finish in the Scottish Open, after spending the summer more focused on producing coaching videos in his back garden.

On the front nine, it seemed like the Harrington of old as he played flawless golf and turned in 32 with birdies on the third, sixth, seventh and ninth holes and immediately added another on the 10th. However, he was brought back to earth somewhat with bogeys on the 11th and 13th before grabbing another birdie on the par-5 17th hole.

“It’s an interesting course. There’s a couple of shots you’ve got to hit well on, some of the par-3s are tough . . . I kept myself out of trouble on those holes. I think I’ve come back out of lockdown and I’ve been hitting the ball off the tee the best I’ve ever hit it and I’ve been putting well. My irons and my wedges haven’t been good and my wedges were poor today. [But] I’m in a nice place. I don’t feel in any shape or form that I outplayed myself. So, we’ll see how the rest of the week goes,” said Harrington.

He admitted that his return for the four tournaments in Europe – the Irish Open, Scottish Open, BMW PGA and Scottish Championship – whet his appetite to compete again. “You want to keep going. I’ve got an invite to Houston next week, so it was a great opportunity to come and play another two events. I’ll probably shut down [for the season] then because of the fact I don’t want to be flying back and forth at this time . . . travelling from Ireland, it’s a long way to be in a tin can at this stage, dealing with almost 10-hour flights or more and then connections. I’m going to have to satisfy myself with this tournament and Houston.”

Harrington’s last career win came in the 2016 Portugal Masters while his last win on the PGA Tour was in the 2015 Honda Classic.

Waterford golfer Séamus Power is also in action in Bermuda and he opened with a two-under 69 that included three birdies and a single dropped shot on the par-3 16th.

Peter Malnati, a 33-year-old American whose only PGA Tour win came in the 2015 Sanderson Farms Championship, claimed the first round lead with a superb opening round of eight-under-par 63.

Malnati credited recent fatherhood with putting a different perspective on his approach to the game, although an improvement in the long game has helped his consistency.

“My strengths that have kept me on tour for as long as I’ve been have been wedges and short game and putting and I’ve worked hard to make sure that those are still sharp. My long game’s starting to click a little bit and get better, so that’s what is going on here right now.”