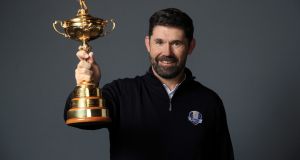 Pádraig Harrington of Ireland poses with the Ryder Cup trophy as he is announced as the European Ryder Cup Captain for 2020. Photo: Andrew Redington/Getty Images

The cat was finally let out of the bag to confirm what the dogs in the street have known for some time: Pádraig Harrington was officially confirmed as Europe’s Ryder Cup captain for the defence of the trophy against the United States in Whistling Straits, Wisconsin, in September 2020 . . . and promised he wouldn’t be the “fuzzy, cuddly type” of captain.

Harrington – a six-time Ryder Cup player and a vice-captain for the past three matches – was confirmed as captain at Wentworth Golf Club, outside London, where the 47-year-old Dubliner expressed himself “thrilled” to take on the role.

The three-time Major champion was a red-hot favourite for the job after throwing his hat into the ring after last September’s decisive win over the Americans in Paris, where Thomas Bjorn filled the captaincy position.

Harrington is the third Irishman to be captain in the last four stagings of the match, following Paul McGinley at Gleneagles in 2014 and Darren Clarke at Hazeltine in 2016. Harrington said he would take “little bits” from each of the nine captains he has served under into the role for the match in 20 months time, where the USA is most likely to be skippered by Wisconsin native Steve Stricker.

“It’s a tremendous honour to be named Ryder Cup captain and I am relishing the next 20 months as we work towards Whistling Straits and Europe’s defence of the trophy. I have played under, and being involved with many wonderful captains since I made my debut in the contest 20 years ago and I would like to think that my captaincy will be a mix of them all. I am very much looking forward to taking on this role,” he said.

In his Ryder Cup playing career, Harrington claimed a total of 10½ points over his six Ryder Cup appearances. His biggest contribution was in the 2004 match at Oakland Hills in Detroit (where he would subsequently win his PGA title in 2008) when he won four of five matches in Europe’s record-breaking 18½ to 9½ win. That team was captained by Bernhard Langer and Harrington conceded he would most likely have a lot of similar traits to the German in how he conducted his captain’s role.

The Offload: James Ryan chuffed for Leavy and his new puppy 10:00
Harry Gregg: a reluctant hero and a revered shot stopper 07:51
Hero of the Munich air disaster Harry Gregg dies aged 87 07:42
Wins for Wexford, Cork and Clare; Ireland to name updated squad for England trip 07:20
Dublin overcome the elements and Carlow 06:00
Here is your handy guide to sport on television this week