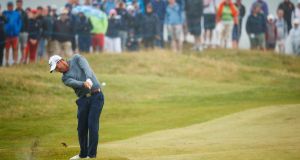 Pádraig Harrington struggled to keep up the pace as he shot a second round of 73 at Lahinch. Photograph: Oisin Keniry/Inpho

Pádraig Harrington treated himself to a 99 ice cream cone after claiming the first round lead but felt he didn’t deserve any such treats after a second round 73 for a midway total of four-under-par 136 brought him back into the pack in the Dubai Duty Free Irish Open at Lahinch Golf Club.

Among those early starters caught up in squally showers, which made club selection more difficult, the 47-year-old Dubliner retreated backwards as Englishman Eddie Pepperell added a 67 to his opening 65 to assume the clubhouse lead on 132, a shot clear of Mexican Abraham Ancer, England’s Lee Westwood and Spaniard Jorge Campillo.

While Harrington struggled for much of his round in stark contrast to his opening day’s play when he made the game look easy, Cormac Sharvin - part of the Team Ireland professional development squad - made the most of his sponsor’s invitation to grind out a 69 for a 36-holes total of five-under-par 135.

Sharvin’s birdie on the 18th enabled him to sign for another sub-par round and, with a top-10 finish earning a place in the field for next week’s Scottish Open and with three exemptions into the British Open at Royal Portrush also on the line here, the Co Down player has sought to keep such targets on the back-burner and to focus on the present.

“It’s a cliché, one shot at a time, that’s what I have been doing and that’s what I plan on doing the rest of the weekend,” said Sharvin, who primarily plays on the Challenge Tour where he is enjoying a decent season and is currently 12th on that money list.

The differences between regular events on that circuit and playing in a Rolex Series event are huge, although Sharvin - part of the winning Britain and Ireland team at the 2015 Walker Cup - has come with his game face on: “I came here to try and compete, I feel like I belong there and hopefully I can show that.”

Harrington endured a tough start with four bogeys in his opening seven holes, failing to get up and down after overshooting the first green and then suffering three three-putts at the third, fifth and seventh. “I needed a strong short game on a tough day and I didn’t have it today. I was a bit tentative and I paid the price for it. I haven’t been up there too many times of late, that’s expected,” said the Dubliner.

Harrington may have slipped back into the field, but is still very much in the mix. “I am very much thinking of winning this week but I am overall focused. I’m certainly not playing to finish 12th or anything like that. I am playing to see where my game is at and trying to get my routine sharp. I saw some good stuff yesterday (in the first round) and I’m going to keep with that now for the next few weeks and see where we stand.”