Pádraig Harrington and Graeme McDowell three off the lead in Scotland 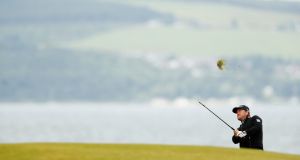 Graeme McDowell pitches the ball onto the green durin the second round of the Aberdeen Asset Management Scottish Open at Castle Stuart Golf Links in Inverness. Photograph: Jason Cairnduff/Action Images via Reuters/Livepic

Pádraig Harrington and Graeme McDowell both remained in contention for the Aberdeen Asset Management Scottish Open at Castle Stuart in Inverness on Friday as the forgotten man of European golf surged into contention for a first win in three years.

Italy’s Matteo Manassero, the youngest winner in European Tour history when he claimed the Castello Masters in 2010 aged 17 years and 188 days, carded a five-under 67 to move to six under to trail leader Alex Noren by two shots, the Swede rising to the top of the leaderboard on the back of five birdies in seven holes.

That helped Noren go one better than Manassero with a 66, with New Zealand’s Danny Lee also going around in six under to take a share of second spot with England’s Eddie Pepperell, who signed for a 67.

Harrington and McDowell both carded three-under rounds of 69 to get to five under and a share of eighth position going into the weekend play.

Michael Hoey made the cut on the number after a level-par round of 72, but Paul Dunne, who finished on four over after a 70, and Shane Lowry, 73 for six over, will have the opportunity to head to Troon early ahead of next week’s British Open after missing the cut. Paul McGinley also failed to make the weekend action after a second round of 76 .

The last of Manassero’s four European Tour titles came in the prestigious BMW PGA Championship in 2013 and helped him reach a career-high of 25th in the world, but the 23-year-old arrived in Scotland a lowly 596th after just two top-10 finishes since the start of 2014.

A change of technique in pursuit of more length off the tee was initially to blame for the slump in form, but Manassero admitted it then became a mental battle to rediscover the kind of form he showed on Friday.

“It has been really hard with a lot of ups and downs, mainly downs,” said Manassero, who was just 16 in becoming the youngest winner of the Amateur Championship in 2009 and finished 13th in the Open at Turnberry a month later.

“I was feeling bad on the golf course. Every time I had an important or difficult shot I was missing it because of the (mental) approach. It’s something that starts with little things and when you have never really played badly before, it’s hard and you keep going down.”

Manassero missed 16 cuts in succession from last year’s Irish Open and was 893rd in the world rankings following another early exit from April’s Spanish Open.

However, he showed signs of improvement the following two weeks in China and finishing 12th in Sweden and 13th in Germany recently confirmed he was back on the right track.

“I found in myself a way to get out of it,” Manassero added. “It was a slow process, it was not something that clicked and that’s probably a good thing because I know why I am playing better and feel better.

“I got a lot of help, people not always cuddling me but telling me off for certain things. You only want cuddles when you don’t feel good but it’s the only thing you don’t need probably.

“It’s exciting, of course, being up on the leaderboard and when it’s by playing well and not just by scrambling well or by some sort of escape, it’s even more exciting and I’m happy.”

Lee, who was the youngest European Tour winner before Manassero after victory in the Johnnie Walker Classic as an 18-year-old amateur, was supposed to be defending his Greenbrier Classic on the PGA Tour this week.

But after devastating floods caused the event to be cancelled, the world number 48 decided to compete in Scotland and donate money for every birdie ($500 US dollars) and eagle ($1,000) he makes to the flood-relief efforts in West Virginia.

“I know it’s not that much to help everybody but I’m trying to make as much money as possible to add a little bit of help,” Lee said. “It was a huge breakthrough for me to capture my first PGA Tour victory last year and ever since I’ve been playing some great golf.”

Further down the leaderboard, 2013 champion Phil Mickelson recovered from two early bogeys to add a 69 to his opening 76 and make the cut with a shot to spare.

1 Gary Neville in Qatar an exercise in semi-journalism
2 Matt Williams: Expect the unexpected in rugby’s greatest tournament
3 Jürgen Klopp insists Liverpool title party is not on his mind
4 Investment in our Olympic hopefuls may be costly – but it’s worth it
5 Owen Doyle: Creeping professionalism of schools rugby a threat to the game
Real news has value SUBSCRIBE