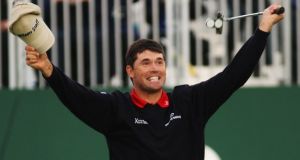 It can’t only be attributed to him, as if he were some sort of genius who concocted a formula to enable Europeans to emerge as a force in the Major championships.

Yet, there is worth acknowledging Pádraig Harrington’s role as the code-breaker in that his victory in the British Open in Carnoustie in 2007 - and up to the latest triumph by Spain’s Sergio Garcia in the Masters - was the catalyst for a sea change in how Europeans rediscovered a way to actually win on golf’s biggest stages.

An analysis of the figures is an interesting one, something which would likely resonate with Harrington’s own accountant’s brain.

In the 41 Majors prior to Harrington lifting the Claret Jug in 2007 and taking it back home to the foothills of the Dublin mountains to at times allow ladybirds to thrive within its chamber, there were two European winners in the Majors championships which equates to a win percentage of 4.9; a rate of success that increasingly put a strain on those seeking to turn the tide.

That Harrington’s breakthrough Major win of 2007 was followed by further wins in the 2008 Open and US PGA championships provided the kind of dominance that was only associated with Tiger Woods in that generation, yet others took inspiration from his deeds: since 2007, European golfers have won 15 of the 39 Major championships contested, a winning strike rate of 38.5 percent.

It is quite a contrast, so it is with justifiable attribution to the Dubliner that it can be acknowledged as the Harrington effect: players looked to him, and truly believed if he could win, then so could they.

In that period since the Open of 2007, Ireland, as an island, is the dominant player in titles won. But the list in itself is interesting: Ireland (9), England (2), Germany (2), Sweden (1) and Spain (1). Harrington’s breakthrough win and his follow-up ignited matters to the point where the superstar that is Rory McIlroy breezed onto the scene knowing that Majors were in his destiny but pertinently instilled a belief in Graeme McDowell and Darren Clarke that it was also their fate.

But Martin Kaymer, too, has acknowledged that it was seeing Harrington conquer all-comers in the Majors that also gave him the confidence to close the deal (twice) when it mattered, while Henrik Stenson has gone on the record in stating that the Harrington factor was one which spurred on other golfers.

It was following his first Major, the PGA at Whistling Straits, that Kaymer talked of getting extra incentive from Harrington’s deeds. “It gives you motivation, it gives you the belief that it is not always about Tiger Woods,” remarked the German.

Where talk prior to Harrington’s breakthrough had been about the drought of European Major winners, the strike rate since has made it certainly a golden era for Irish successes but also for European.

Garcia’s win, ironically enough, is the one that probably has less to do with the Harrington effect. The Spaniard, after all, was the one who emerged on the scene in 1999 at the PGA Championship in Medinah as if he were the great hope of European golf ; and, since then, he watched - up close and personal at times, especially in losing that play-off to Harrington at Carnoustie - as one after another other Europeans got to lift the prizes that most matter in the sport.

That Garcia finally emerged from their shadows shows that it is always worth keeping the faith, even when at times it is like fighting a lost cause.