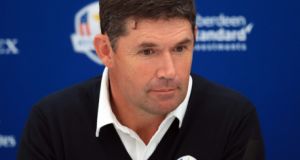 If you imagine there is something of a green hue around the Ryder Cup of recent years, it is because it is true: the influence of the Irish, on the course and off it, has manifested itself in such a manner that the historic, somewhat emotional associations of the past - of Christy Junior’s two-iron at The Belfry, of Eamonn Darcy and Philip Walton’s rearguard singles heroics - have been replaced by more tangible factors.

That two of the last three European team Ryder Cup captains have been Irish - Paul McGinley at Gleneagles in 2014 and Darren Clarke at Hazeltine in 2016 - might be seen as waiting an age for a bus only for two to come along in quick succession.

And, sure, there have been mumblings from some quarters that the Irish have feasted at the top table enough to allow others to take turns at captaincy. But that shouldn’t at all prevent Pádraig Harrington getting his chance, even as soon as the 2020 match at Whistling Straits. So what if that would make it three Irish captains out of four? The simple fact is that he deserves it. Give it to him.

The manner in which Europe’s captains are now selected makes it seem a little like an old boys’ club, with recent past captains all having a strong say in who takes on the role. In effect, it means captains are selected by their peers. There’s nothing wrong with that, especially now that the days of a captain doing the role in successive matches is long gone. Nowadays, it is a one-time gig.

Harrington - who will be 47 by the time this year’s Ryder Cup takes place in Paris - knows the role better than anyone having played in six matches (1999, 2002, 2004, 2006, 2008 and 2010) and, with his appointment as a vice-captain by Thomas Bjorn for the upcoming match, he will have served as a vice-captain on three occasions. That’s an impressive CV by any standard. The fact he is Irish shouldn’t go against him; if anything, it should be in his favour.

Indeed, there is a quote from Bjorn that dates all the way back to 2004 which actually concerns Paul McGinley. Back then, as the Dubliner played nine straight weeks in his bid to make the team, Bjorn made the case that he would deserve a wild card pick from Bernhard Langer: “Paul is the key factor in the whole Ryder Cup make-up. He’s the guy who is playing the best and he’s done really well to get where he is on the (qualifying) table and Bernhard should remember that. You also have to remember that Paul is Irish and the Irish seem to win the Ryder Cup.”

As it happened, McGinley made the team by right; but Bjorn’s observations, although 14 years on, remain relevant in so many ways. The Irish influence in the competition is stronger than ever . . . and, come 2020, Harrington deserves that chance to bring his style of captaincy to the table. The queue after him will include Lee Westwood, Ian Poulter and others; next up though, it should be Harrington.