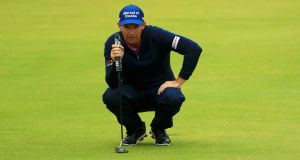 Pádraig Harrington is one of six major champions in the field in the Barracuda Championship. Photograph: Mike Ehrmann/Getty Images

Pádraig Harrington will look to take inspiration from Shane Lowry’s Open triumph in the Barracuda Championship, where high points totals rather than low scores will be the order of the day.

And with the world’s best contesting the WGC-FedEx St Jude Invitational in Memphis, the door is open for some of the PGA Tour’s lesser lights or veteran stars to claim a lucrative victory at Montreux Golf and Country Club in Reno.

The Barracuda Championship – formerly known as the Reno-Tahoe Open – uses a Modified Stableford format, which allocates points based on the number of strokes taken at each hole.

Eight points are awarded for an albatross, five for an eagle, two for a birdie, zero for a par, minus one for a bogey and minus three for a double bogey or worse.

Harrington, who is one of six major champions in the field, missed the cut in the British Open at Royal Portrush but was waiting beside the 18th green as Lowry won his first major title on Sunday.

Europe’s Ryder Cup captain has missed the cut in six of his 10 events in 2019 since returning from a wrist injury, although he did lead the Dubai Duty Free Irish Open after an opening 63 before fading to 50th.

Harrington will partner Patrick Rodgers and Beau Hossler in the first two rounds in Montreux, where Emiliano Grillo, Ryan Palmer, Andrea Pavan and Martin Kaymer are the only players in the world’s top 100 competing.

Kaymer was first reserve at Royal Portrush but missed out on a place in the field for the first time since 2007 as there were no late withdrawals.

The former world number one had slipped to 191st in the rankings following a missed cut in the US PGA Championship, but has climbed to 89th after four top-20 finishes in his last five events.