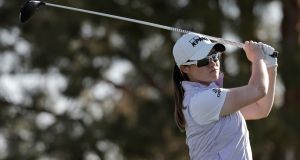 Leona Maguire has been named The Irish Times/Sport Ireland Sportswoman of the month for March. Photograph: Michael Owens/Getty

When Leona Maguire went to the top of the leaderboard in the early stages of the first LPGA major of the season, we were beginning to wonder if a trend was developing with our 2021 awards.

Rachael Blackmore was our February winner after a sparkling month that included her Irish Champion Hurdle victory on Honeysuckle - and then she went on to have a March that she’s unlikely ever to forget, not least for being the leading rider at Cheltenham with those six triumphs.

We had already chosen Maguire as our March winner when she threatened to make April the biggest month of her entire career, so by then we were reckoning that winning a monthly award was acting as a precursor to truly gargantuan achievements.

It wasn’t to be for Maguire at the ANA Inspiration in California, her challenge fading out after that brilliant opening round of 67, but again we caught a glimpse of the professional potential of the woman who spent a record 135 weeks as the world’s number one ranked amateur golfer.

We saw it too at March’s Drive On Championship in Florida where Maguire secured her first ever LPGA Tour top 10 finish on American soil when she birdied the last two holes to tie for sixth with defending champion Danielle Kang (she finished tied-fourth in last year’s ISPS Handa Vic Open in Australia, which was sanctioned by the LPGA).

That finish moved Maguire to second in the ‘Rookie of the Year’ race - it’s actually her second season as a professional, but the LPGA opted not to make the award last year because of the season being interrupted by the pandemic - and earned her a congratulatory text from Solheim Cup captain Catriona Matthew who has the task of a picking the team for Toledo in September. Maguire will be hoping to receive another congratulatory text when Matthew chooses her six wildcards.

Before then, of course, there’s the small matter of the Olympic Games where she is likely to be joined by Stephanie Meadow, the Jordanstown player enjoying an encouraging ANA Inspiration herself, a final round of 67 securing her a top 20 finish. Add in Olivia Mehaffey’s ninth place at the Augusta National Women’s Amateur and it proved to be a highly impressive spell for our female golfers across the Atlantic.

Maguire, then, takes our March award, adding her name once again to our roll of honour - she first appeared on it back in 2007 with her twin Lisa, when they were both just ..... 12.

December: Aoife Doyle (Camogie) and Sinead Goldrick (Gaelic football). The pair were both chosen as the player of the match in their respective All Ireland finals, Doyle’s display in the Kilkenny attack helping her county end a run of three defeats in the final in a row, while an outstanding performance against Cork by Goldrick, currently playing for Melbourne FC in the Australian Football League, was a major factor in Dublin completing a four-in-a-row.

January: Nadia Power (Athletics). The 23-year-old Dubliner enjoyed an exceptional start to the year, smashing her 800m indoor personal best and setting two Irish records before Síofra Cléirigh-Buttner regained it. While she was disappointed not to reach the 800m final at the European Indoor Championships, her first senior championships, finishing fourth in her semi-final, Power says she has taken enough confidence from her form to send her in to the summer in high spirits - a summer, she hopes, that will include a trip to Tokyo.

February: Rachael Blackmore (Horse racing). A 10 length victory on Honeysuckle in the Irish Champion Hurdle at Leopardstown was the highlight of a highly successful February for the Tipperary jockey, but you might have heard that March proved to be a half decent month for her too. A stunning week at Cheltenham, which included another Honeysuckle success in the Champion Hurdle, saw her crowned top jockey with six wins.

Seán Moran: DRA saving the GAA a lot of money for 16 years 06:00
Sarah Lavin bidding to clear last hurdle on the way to her Olympic dream 06:00
Basketball’s loss is rugby’s gain as Lauren Delany makes up for lost time 06:00
Gordon D’Arcy: Béibhinn Parsons is the gift, IRFU must now do the giving 06:00
Matsuyama gives Tokyo Olympics promoters some cause for optimism 01:00
Here is your handy guide to sport on television this week