Out of Bounds: New European captain knows home advantage is huge in the Ryder Cup 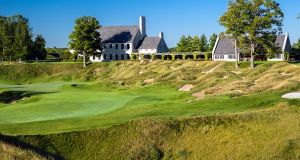 The distance from Chicago to Kohler, Wisconsin - the venue for the 2020 Ryder Cup match at Whistling Straits - is 145 miles. Well, there or thereabouts. It is a road trip that Pádraig Harrington has already noted, primarily in view of the large Irish diaspora in the Windy City and how, in effect, they could help take the wind out of the sails of the home crowd come the actual match.

Home advantage is huge when it comes to the Ryder Cup, there’s no doubt about that. You have to go all the way back to 1993 since an American team - captained by Tom Watson - won on European soil, at The Belfry in England. While the last European win on US turf came in miraculous fashion at Medinah in 2012, under José Maria Olazabal’s stewardship. Before Ollie, Bernhard Langer also inspired a record-breaking win for Europe at Oakland Hills in 2004.

The appeal of going to the USA and winning as an away captain is also something that Harrington had to get his head around before embracing it. He knows from experience just how unruly things can get stateside.

A little extra support wouldn’t be a bad thing, at all at all

His first Ryder Cup match as a player was at Brookline outside Boston in 1999 when the final day’s play was loud, boisterous and often crossed the line of sporting etiquette, while he was a vice-captain at Hazeltine in 2016 when the situation got so bad that the PGA of America (too late) attempted to regain control of the home support by issuing messages on the giant screens around the course requesting them to respect the European players.

Harrington, as he would, has factored in all of these things but, in truth, much of it is beyond his control. The likelihood is that Steve Stricker will next month be announced as the USA captain for the match and, in fairness, you couldn’t find a nicer guy on tour. He won’t be stirring things up, but, again, so much is also out of his control. A captains’ agreement can only do so much, but mainly relates to the behaviour of players, not the spectators.

So it is that Harrington knows he - and his team - will have to face and cope with whatever comes at them from the crowd.

“There’s no doubt this is what the players love and embrace is the atmosphere. We don’t get that anywhere else . . . it’s nearly like playing in front of a football crowd.

“Sometimes the level of decency in those cheers have crossed the line and I know the US players, the senior players, I know them really well, the vice captains, these are guys I’ve played with over the years . . . are pretty similar to me: We love to play really hard, really fight for position on the golf course, but we understand that it’s got to be won the right way. There shouldn’t be an asterisk. It should be won in a golfing manner and a sporting manner. Every golfer ultimately walks away from our sport believing we’ve got the best sport in the world because of the fact that it’s played with such good manners and in such a sporting sense, and they will look for that. You know, we will discuss it. We will talk about it. And you know, we will try and manage the side of it.

“It will be talked about and it will be managed and I’m sure it will be in the captains’ agreement. I know the players at the top that will be involved in the managerial side, whether captain or vice captain. They will be on the same page as me. They want to win and they are tough characters, but they won’t want to win with any sort of asterisks. They will want to win fair and square.”

And so it was that Harrington noted the distance from Kohler to Chicago, with its large Irish community. 145 miles. A two hour drive. A little extra support wouldn’t be a bad thing, at all at all.