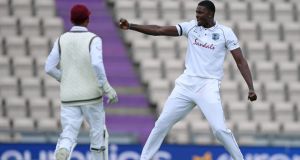 West Indies’ Jason Holder celebrates taking the wicket of England’s Ben Stokes on the second day of the first Test at the Ageas Bowl in Southampton. Photograph: Mike Hewitt/AFP via Getty Images

Jason Holder has conducted himself impeccably off the field since the West Indies’ arrival in England. Now he has excelled where it really matters to him and his colleagues out on the broad green acres of the Ageas Bowl. Holder calmly enhanced his standing as the leading all-rounder in Test cricket according to the ICC rankings by taking a career best six for 42, the sixth time he has produced a five-wicket haul in his last 10 Tests.

As a consequence England were bowled out for 204, a total that might have been even smaller if the West Indies had not dropped England’s highest scorer, Ben Stokes, twice. By the close, which came when the light faded just before six o’clock they had capitalised on the efforts of their bowlers by scoring 57 runs for the loss of one wicket. It was undoubtedly the West Indies’ day and the sun is due to make an appearance on Friday.

The stadium may be deserted but there was an intensity to the play throughout. Those two catching aberrations aside Holder oversaw an impressive performance in the field; his bowlers displayed the required mixture of discipline and aggression while behind the stumps Shane Dowrich, who took a superb catch to dispatch the dangerous Jos Buttler, set a fine example.

Shannon Gabriel, the fastest bowler in the side, shared the wickets with Holder, who is the slowest of the pace quartet. Gabriel finished with four for 62. As Stuart Broad could not resist tweeting from his hotel balcony as England’s batsmen were battling away there were “tremendous English bowling conditions” out in the middle, the sort that, curiously enough, Broad himself has been quite good at exploiting throughout his career.

The clouds hung low over the ground all day, the floodlights were permanently on and the ball nibbled just enough. It is a good, blameless track but there was a little swing and occasional movement off the pitch. The only time the England batsmen looked remotely in charge was during a 67-run partnership between Stokes and Buttler.

Gabriel made the breakthrough early on with another pacy delivery that nipped into a right-hander. The victim this time was Joe Denly, who appeared to be in a good position to defend the ball – just after his stumps had been spectacularly spreadeagled. Soon after Rory Burns joined Denly in the dressingroom after a shrewd review by the West Indies.

Gabriel propelled a yorker from around the wicket and the ball hit the pads of Burns before dribbling away on the leg-side, which suggested to umpire Richard Kettleborough that the ball was missing leg stump. The review proved otherwise, which became an uncomfortable pattern throughout the day. The West Indies had to seek reviews for two more lbws to be granted and in the final session John Campbell, opening the batting, reviewed successfully twice (his third one, however, was fruitless). If nothing else this was another vindication of the system – though there are few critics of it now.

So it was that another review meant that Zak Crawley became Holder’s first victim of the innings, lbw. By now it was becoming evident that the West Indies, who had bowled well on Wednesday, were bowling better on Thursday because of their determination to pitch the ball a little fuller. Olly Pope hit two crisp boundaries that suggested that he was seeing the ball well before nibbling outside off-stump and edging to Dowrich. So now England had subsided to 87 for five.

Stokes might have followed straightaway. A top-edged hook off Alzarri Joseph offered a tricky catch to Kemar Roach running in from long-leg. The ball was in his hands momentarily before spilling out as his elbows hit the ground; after lunch a simpler chance from Stokes off Roach was dropped by Shamarh Brooks at short extra cover.

There was a flurry of boundaries before Holder made the vital interventions. Stokes had been using his feet to Holder, a tactic unlikely to be employed against Gabriel. Often he shuffled down the pitch before the ball was bowled hoping to create a half-volley and, presumably, to disturb Holder’s impeccable rhythm. Now he stayed back in his crease and succeeded only in disrupting his own rhythm. A fine delivery was feathered to Dowrich.

Buttler departed in the same fashion except that this time the edge required the keeper to dive to his right before taking the ball deftly in one hand. England needed a sparky, unbeaten 31 from Dom Bess to pass 200. The way Jimmy Anderson played Holder suggested that there were not too many demons in this pitch; he was less convincing against Gabriel, who soon shattered his stumps.

Jofra Archer shared the new ball with Anderson and mustered considerable pace. In response Kraigg Brathwaite and Campbell were spirited in their different styles; the former was obstinate and eager just to clip the ball off his hip; the latter was more adventurous, crunching three no-nonsense boundaries. Three times he was confronted with Richard Illingworth’s raised finger when struck on the pad by Anderson deliveries and on the first two occasions he survived after reviews.

There were three extremely lively overs from Mark Wood, who touched 95mph before the light deteriorated, but as Holder had demonstrated – and a little hunch suggests that Broad might possibly agree with this theory – pace is not everything.