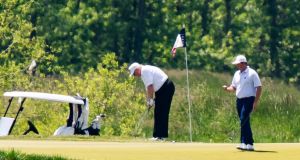 Early one Sunday morning in August, 2002, president George W Bush pulled up to the first tee at Cape Arundel golf club in Kennebunkport, Maine, his father alongside him in the cart, and addressed reporters. He delivered a measured condemnation of an overnight suicide bombing in Israel that killed nine people, castigating those threatening the Middle East peace process. “I call upon all nations to do everything they can to stop these terrorist killers,” he said, pausing for a second before announcing, “Now, watch this drive!”

A moment so crass and ill-advised that even the tone deaf, brass-necked Bush administration had to admit the optics were troublesome. Not long after that unseemly episode, he put away the clubs for the rest of his time in office, realising how out of kilter it looked to be laughing and joking on fairways while a generation of American soldiers were fighting and dying in Afghanistan and Iraq on his orders. Even that smidgen of self-awareness in a mediocre leader seems like such a quaint memory now.

1 Gardaí found naked man on crucifix being whipped in Dublin club, court told
2 David McWilliams: ‘Ireland is three decisions away from being a perfect country’
3 Many people identified as close contacts refusing to come forward for Covid-19 testing
4 A US food writer moved to Ireland. Here’s what he found
5 Two in custody after Ryanair flight to Dublin forced to divert
6 My aunt never told us that Gran passed away with no will
7 Man (47) charged over damage to Luke Kelly statue in Dublin
8 Ryanair to slash 1,000 flights from August and September schedules
9 Docklands swimming pool worth €15m would cost council ‘zero’
10 Game Changers: Gary O’Toole took a stand when others turned their heads
11 Fintan O’Toole: Jack Charlton allowed us to accept the English part of our Irishness
12 Gerry Thornley: Munster will make for interesting case study when rugby resumes
13 Random coronavirus testing for people entering Ireland under consideration, says Varadkar
14 The $6bn judgment pitting Nigeria against Irish businessmen
15 Leo Varadkar says Barry Cowen has more questions to answer
16 Green Party TD queries ‘usefulness’ of another appeal in €13bn Apple tax case
17 Mandatory quarantine and flight cancellations unlikely despite rise in cases
18 Marian Keyes: ‘I thought when I stopped drinking my life was over. It was just beginning’
19 ‘Mother Mooney’, the Mayo woman who campaigned for justice for her wronged son
20 Covid-19 laces granting of Irish citizenship with danger
21 US passengers fly into Dublin: ‘I’m here for six days. I guess I’ll have to stay inside’
22 Government to push through €2bn credit guarantee scheme next week
23 Iftas: Normal People arrives too late for ‘virtual’ awards
24 Majority of employees don’t want to return to pre-Covid working patterns
25 Georgia and Fiji in line to join Six Nations sides in eight-team tournament
26 Fr Enda McDonagh remains powerful voice for theology at the fringe
27 Coronavirus: Parents of new babies to get three extra weeks’ leave
28 Thandie Newton names names. Will Hollywood punish her?
29 Murder accused claims he is victim of Garda campaign
30 Back with our old friends at eir – and nothing seems to have changed
31 Costs and borrowing rules locking a generation out of home ownership, builder warns
32 If it’s safe to do so, could this be the time to spend for Ireland?
33 Will Revenue come calling with tax bill if inheritance tax threshold falls?
34 California shuts down again as US coronavirus cases surge
35 My daughter won’t go out to meet friends after lockdown
36 50 best Irish albums of all time – in order
37 UK to purge Huawei from 5G by 2027, angering China
38 ‘There are those who must flee Ireland to see Ireland plain’
39 Action needed to prepare for second wave in mental health settings, committee told
40 Aperol Spritz originally comes from which country?
Real news has value SUBSCRIBE