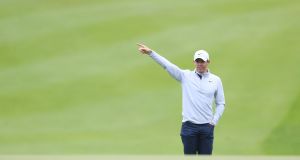 Rory McIlroy in practice ahead of the US PGA Championship which gets underway later today. Photograph: Tom Pennington/Getty

It has been more than a year since Shane Lowry lifted the Claret Jug on July 21st 2019 - improbably, that British Open remains the last of the four Majors to have been played. However the wait for a Major is nearly over, as the US PGA Championship gets underway in San Francisco later today. The tournament is being held at Harding Park, behind closed doors, with Lowry one of three Irish golfers in the field alongside world number three Rory McIlroy and Graeme McDowell. Lowry tees off at 4.11pm Irish time alongside Brooks Koepka and Gary Woodland; McIlroy is off shortly after at 4.33pm with Tiger Woods and Justin Thomas while McDowell gets underway at 9.35pm. McIlroy is looking to end a six-year Major drought in California, while defending champion Koepka has been bullish about his chances this week.

Manchester United are through to the quarter-finals of the Europa League after they came from behind to beat Austrian side LASK 2-1 at Old Trafford last night. Anthony Martial’s late winner gave Ole Gunnar Solskjaer’s side a 7-1 victory on aggregate following their 5-0 first leg win on March 12th. United will now face FC Copenhagen in the last-eight, with Wolves looking to join them in the Europa finals as they take on Olympiakos in the second leg of their last-16 tie tonight (kick-off 8pm, 1-1).