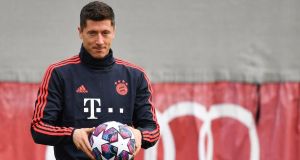 Ireland headed into last weekend on the back of a fine win over Wales and with dreams of a Triple Crown and potentially the Grand Slam. Now they are licking their wounds after another bruising 24-12 defeat to England at Twickenham. And in his column this morning Gerry Thornley has reflected on the fickle nature of Irish rugby supporters, who either deify or discard their team depending on each result. He writes: “So it was that the 2018 Irish team was the greatest of all time (and it was certainly the highest achieving of all time, whether or not it was the most talented) whereas the 2019 version was the worst ever. Likewise, the squad may as well have been sent home after losing to Japan at the World Cup, only for them to be given a serious chance of beating the All Blacks in the quarter-final, whereupon it was back to being an all-time low. Reactions to every Irish win and Irish defeat appear to be almost as fickle as the wind.”

The Six Nations takes another week’s break now before Italy visit Dublin in the fourth round on Saturday March 7th, however there are fears that game could be called off due to concerns over the spread of coronavirus. Reviews of mass gatherings are set to take place in the coming days, including the clash at the Aviva Stadium. Ireland coach Andy Farrell is likely to ring the changes for the visit of the Azzurri, with both Caelan Doris and Ronan Kelleher in line for starts. And he insists his side can still challenge for the Championship despite suffering the first defeat of his tenure: “One hundred per cent, I definitely do. We are in the same position as a few other teams and we need to be disappointed with this. Some might say the scoreline flattered us, but at the end of the day it is a 12-point margin. We could have rolled over against a side that were desperate [for a win]in England, but we didn’t and we gave ourselves as good a chance as any.”

1 Coronavirus: Republic sees record highest daily figure for new deaths at 36
2 Coronavirus: More ‘striking’ evidence BCG vaccine might protect against Covid-19
3 Last couple in paradise: The Covid-19 honeymooners stranded in the Maldives
4 Things are looking up again: Spectacular supermoon due in Irish skies
5 I’ll be watching my father’s funeral on Zoom from New Zealand today
6 Una Mullally: Leo Varadkar’s mask drops again
7 A Michelin-starred chef’s recipe for a simple soup with big flavour
8 Boris Johnson breathing without assistance, Raab says
9 Eccentric Thai king’s flying visits ensure a colourful German lockdown
10 Do you smoke or vape? Here’s why Covid-19 means you should quit right now
11 Coronavirus: Property rental in the jaws of the epidemic
12 Coronavirus: Death toll in UK rises by 786 to more than 6,100
13 Bats, pangolins and viral Lego: curious clues of the new coronavirus
14 Fintan O'Toole: Crisis management is what the State does best
15 John Delaney’s profligacy haunts FAI again as McCarthy departs
16 Restarting Ireland: When and how will we ‘get back to normal’?
17 Genetics shed light on origins of Irish strains of Covid-19
18 Larry David’s quarantine: ‘I’m reading Woody Allen’s memoir. It’s fantastic’
19 Collison brothers worth an estimated €2.9bn each
20 Netflix has revealed its most-watched content. You might be surprised
21 I want to change my will quickly in case I fall ill. Do I need a lawyer?
22 Pope Francis decries ‘unjust sentences’ after Cardinal Pell acquittal
23 Beyond the call of duty: Community gardaí help woman move her mother to safety
24 Gerry Thornley: Global pause allows rugby to tidy up the breakdown
25 WhatsApp limits message forwarding to slow spread of misinformation
26 Good news: a great tale of community support and five more things that made us happy today
27 Coronavirus: Vaccines still needs scientific scrutiny despite global rush, expert warns
28 ‘It’s just stuff’: Doctor leaves all possessions behind in Australia to return to work in Ireland
29 Donald Trump’s clown car administration has put the fear in all of us
30 Coronavirus response: Air passengers could lose refund right under Government plans
31 How can the State support me now I’ve lost my job?
32 Irish doctors on getting Covid-19: ‘In 90 minutes, I deteriorated quite rapidly’
33 Coronavirus: Stop calling this a war. It’s unhelpful and dangerous
34 Department of Health agrees memo with the North on Covid-19
35 Coronavirus: Why are men twice as likely to die as women?
36 Tuberculosis vaccine ‘potential game-changer’ in Covid-19 fight
37 Coronavirus: Michelin-starred chefs dish out meals for front-line workers
38 What is Houseparty, the app everyone’s talking about – and not in a good way?
39 The chickpea stew that broke the internet in the US is here. Give it a go
40 Refund scheme for commuter tickets being considered by NTA
Real news has value SUBSCRIBE