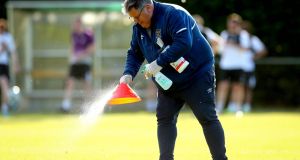 As belts continue to tighten in rugby and the sport feels the financial squeeze of the coronavirus crisis, Ireland’s professional rugby players could be set for a 20 per cent pay cut as the IRFU look to make an estimated saving of €13 million. The pay cut applies to all IRFU staff, who will also be moving to a four-day week. And in his column this morning, Gerry Thornley suggests it is unreasonable to subject players to the same cut - especially when their working hours won’t be reduced. He writes: “Even for players on provincial contracts ranging from, say, €100,000 to €200,000, it’s a shortfall of €20,000 to €40,000 per year. Furthermore, these losses are in the context of a professional playing career which might, if they are lucky, last 10 or even 15 years at an extreme push. These are not jobs for life. They are also short, highly attritional jobs which, in the vast majority of cases, have no tangible benefit for the careers in the real world which take up most of their adult working lives.”

The Premier League returns behind closed doors tomorrow night, with Aston Villa welcoming Sheffield United to Villa Park (6pm, Sky Sports) before Arsenal take on Manchester City at the Etihad (8.15pm, Sky Sports). And Villa boss Dean Smith has said he fully supports defender Tyrone Mings for attending a Black Lives Matter march in Birmingham. He said: “There have been questions whether he asked for permission - he doesn’t need to ask me for permission to go and stand up for something he believes in.” Meanwhile ahead of the restart we have previewed the prospects of every team, their lockdown losers and heroes and their hopes for the run-in. You can read that here.

11 Five habits learned during the pandemic that we should keep

12 This warm, spicy stew can be rustled up in 15 minutes

14 David McWilliams: What a Doc Martens boot can teach us about the wealth gap

18 Q&A: Covid-19 new variants in Ireland - everything you need to know

21 Luke O’Neill: Scientists have delivered against Covid-19. Now the politicians need to

22 Brexit red tape: ‘If nothing changes, Ireland will be closed’

26 There is no such thing as unhealthy food

30 ‘A very nice baby with beautiful fair skin ... It was like they were selling a doll’

34 Ireland’s vaccine rollout: Can we stay at the top of the EU league table?

35 Maureen Gaffney: The land of the mother and baby homes

36 Should I end my strained relationship amid the Covid-19 pandemic?

37 Pete Lunn: We need to tackle Covid-19 differently after this lockdown. Here is how