‘I’d like to give you some names, but it probably wouldn’t be a good career move’ 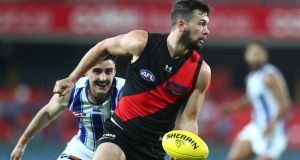 Conor McKenna in action for the Essendon Bombers during the round six AFL match against the North Melbourne Kangaroos at Metricon Stadium on July 11th. Photograph: Chris Hyde/Getty Images

Irish AFL star and former Laois footballer Zach Tuohy has described the Australian official and media treatment of fellow countryman Conor McKenna’s false positive test for Covid-19 as “absolutely outrageous” and “a total farce” – the former Tyrone player initially reported to be positive last month, only three days later be given the all-clear.

For Tuohy, based in the AFL since 2010, the Australian media’s rush to judge McKenna was particularly worrying, after reports suggesting he had deliberately broke quarantine restrictions with his club, Essendon Bombers, by attending an open house viewing and visiting family.

“It was outrageous, absolutely outrageous, a total farce,” said Tuohy, speaking on the Gaelic Players’ Association podcast. “He was guilty by media, he did nothing wrong, as was painted as some kind of idiot who didn’t care about the AFL, and was going to jeopardise the game.

“There are 800 players in the league, however many staff in each of those clubs as well, so you have way over 1,000 people. You can’t keep tabs on them all, it’s only a matter of time before a player returns a positive test, and when it happens, you don’t just get to go the media and call them whatever you want.

“As it happened, it was clerical error, a breakdown in communications somewhere. To be fair, some media have apologised, but it was handled terribly, absolutely terribly. So much of the media are just vultures, absolute vultures, and they’d rather be first than right. I’d like to give you some names, but it probably wouldn’t be a good career move.”

Tuohy’s Geelong team, normally based in Victoria, are currently playing the AFL games based out of Perth, where the recent spike in Covid-19 isn’t as severe. Tuohy also questioned the need to create the extra anxiety around Covid-19 by highlighting McKenna’s initial plight.

“They really, really jumped the gun, and it was absolutely disgraceful the way he was treated. Someone is going to get it, it’s unavoidable, especially given there’s a spike in some states. But of course it’s just breeding anxiety, when there’s a lot of anxiety around.”

McKenna was still given a one-week suspension from the AFL for breaching return to play protocols, but was free to play on the opening weekend after being given permission to leave quarantine early. When subsequent tests came back negative, it appeared that McKenna’s initial results may have provided a false positive.