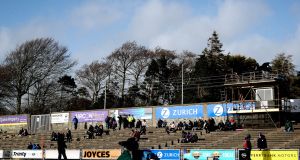 Plans were being made to accommodate up to 800 people in four pods at Chadwicks Wexford Park before the Government decided to delay phase four of the exit. Photograph: Ryan Byrne/Inpho

Wexford GAA has contacted Croke Park, urging that representations be made on behalf of counties to allow bigger crowds to attend matches and questioning the ‘one size fits all’ – or ‘all sizes fit 200’ – approach to venues. This weekend sees the season spring belatedly to life with county championship matches being staged across the country.

Wednesday night’s announcement that the Government would pause phase four of the country’s exit from the pandemic lockdown has thrown a curve ball at the counties, who were expecting the outdoor limit of 200 to rise to 500 on Monday next, but that will not now happen for at least three weeks.

Wexford had already been lobbying to be allowed to quadruple the permitted numbers by establishing four separate pods in their bigger venues and to that effect had written to the authorities.

“The return to sport expert group replied but they’re not the decision makers in this,” said Wexford vice-chairman Micheál Martin on Thursday. “We heard nothing back from the Department of the Taoiseach or NPHET, who we also wrote to.

“That would be 800 people at a game and the four pods of 200 would never encounter each other either on the way in or the way out. I think the Government were sending a message on Wednesday night that they wanted better observance of the protocols but this is piling up stress on club officials.”

Part of the lobbying proposal was based on the fact that leeway was allowed for bigger churches on the basis of an ability to accommodate greater numbers and to maintain social distancing.

Martin has pointed out that matches are outdoors where the transmission rate is nearly 20 times smaller than inside buildings. He also has drawn attention to the numbers that will go to beaches and parks without any supervision and contrasted it with the stewarded and monitored protocols inside grounds.

He says the restrictions are creating undue pressure on voluntary officials.

“The games were going to be an outlet for communities after a difficult few months but there are so few tickets available that only a small proportion of most communities will get to watch their clubs and it’s creating a headache for club officers trying to allocate them.”

By his reckoning about half of the 200 tickets will be required for players, administrators, match officials and media, with the balance to be divided between the two clubs and those members with season tickets.

Despite the difficulties, Wexford are committed to upholding the rules as they stand.

“We’re sticking rigidly to 200 and are being very strict on that. We’re one of the first ones out and want to make sure it’s done properly.”

Chadwick’s Wexford Park is the venue for the first live broadcast of the club season with St Martin’s and Oulart-The Ballagh meeting in Group A on Friday night at 7.30, the game being shown live on TG4.

Martin had good news for hurling followers in the county. The Group C encounter between St Anne’s and Rathnure will also be freely accessible.

“Rathnure and St Anne’s is probably creating the most interest in the county this weekend and we’ve arranged for it to go out free on delayed broadcast on the county YouTube channel as soon as St Martin’s and Oulart is finished.”