Wexford GAA tapping into a healthy respect for the past 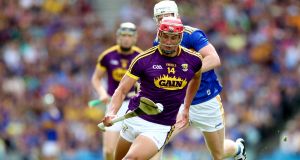 In a very busy schedule of events Wexford GAA, undaunted by pandemic, are running their McCauley Wellness Programme online for the next fortnight. During a time of uncertainty and in the absence of games, it is hoped that the activities will raise spirits amongst all ages.

“We did it last year for the first time, partnering up with McCauley’s [Pharmacy],” says county vice-chair Micheál Martin, “and there was great feedback. There’ll be talks and things of interest to the general sports fan – Billy Walsh is being interviewed from America – and former players will be reaching out to those who are cocooning.”

Pupils can ask their grandparents about their own eras and who their heroes were from the 1950s, ’60s or ’70s

It would have been a shame to lose the momentum of a memorable 2019 when the Leinster title was recaptured after 15 years. In a county which needs little encouragement to hit fifth-gear enthusiasm for hurling, the present will draw inspiration from the past.

“One of the activities we’re promoting is the history of Wexford GAA, ” according to Martin, who is principal of Scoil Réalt na Mara in Kilmore. “For primary school children in particular, we’ve asked for them to look at who their heroes are – Lee Chin or Conor McDonald, Rory O’Connor or whoever – from the current team and then ring a grandparent and talk to them.

“We’ve put up video clips to the Rackards and the 1950s from the television series The Game. Pupils can ask their grandparents about their own eras and who their heroes were from the 1950s, ’60s or ’70s. Maybe even the 1990s depending on their age.”

Tom Dempsey, 1996 All-Ireland winner and hurling pundit, will be conducting a panel discussion with the Dorans, Tony – with whom he won an All-Ireland club medal for Buffers Alley in 1989 – and Colm, All-Ireland winners from 1968. He believes strongly in the strength Wexford hurling takes from its past.

“I’ve always felt that Cork, Kilkenny and Tipperary have got a fantastic tradition and the success to drive that. Wexford haven’t had that level of success but have kept the tradition going and I would feel that the game is almost more deep-rooted here.

“Part of that tradition is the culture of heroes. Nicky Rackard was the first and an icon: ‘The ash tree toppled when he died and scattered seeds at random.’ The seeds were all the people that took up hurling around that time.

“Others followed and they generally played full forward. We had Tony Doran, growing. My whole upbringing was going to Croke Park, not really to see Wexford winning but to see those two high balls dropping on the square that he’d catch and put in the net.

“That created more excitement than the match itself. The line went from Rackard to Doran and I actually thought that Jimmy Houlihan had that aura. Even though things didn’t go well at that time, people loved his style of play – and Billy Byrne at the end of his career in 1996.

“These days Conor McDonald and Lee Chin have taken on the mantle – big men that can go up and win their own ball. That’s changing now but it’s a powerful image in Wexford.

“I grew up in the 1970s when Wexford were in All-Ireland finals and we had five Buffers Alley men on the county panel. Tony Doran was my hero and in those days so accessible. Your hero was the guy down in the field training.

“It’s an old story but back in ’76 and ’77 as young fellas we’d go down to the village in Kilmuckridge and put in a 2p coin and ring Tony Doran the night before a big match and he’d chat with you.”

The consciousness of that tradition in the county was exemplified at the end of the 1996 final when Liam Griffin’s management decided to send on 19-year-old Paul Codd so that Wexford could have a player who’d won an All-Ireland on the field of play for at least another decade.

For Dempsey that day there was a more personal handing-over of the torch.

“After the All-Ireland in ’96, when the whistle went, I was up the Canal End and everybody seemed to be heading in the opposite direction, but Tony Doran came up and put his arms around me.

“It’s sometimes one of the problems for Wexford that there’s such romance in the county about hurling, but here’s the fella I’ve been watching all my life in the very square where I was standing after winning an All-Ireland myself. How could that not be sentimental?”

There will also be panel discussions with great teams of the past (the 1996 All-Ireland hurling champions, the 2008 footballers who made it to the last four for the first time since the 1950s and the three-in-a-row camogie team 2010-12), coaching webinars, calls by past players to those cocooning and, finally, the Walk4Wexford on May 31st.

See wexfordgaa.ie for more details and links to events