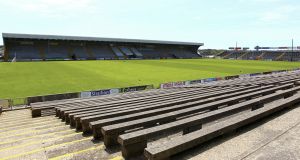 Wexford Park will host the meeting of Oulart-The Ballagh and St Martin’s in the Wexford SHC on Friday night, with the game broadcast live on TG4. Photograph: Ken Sutton/Inpho

Wexford GAA have written to the Government asking that the number of spectators allowed to attend its upcoming club championship matches be raised.

The request is grounded in the exceptionally low number of Covid-19 cases diagnosed in the county but also in the protocols that have been allowed for churches since phase three of the easing of lockdown restrictions, which would be of more widespread application to other counties.

Wexford vice-chair Micheál Martin, who was involved in writing to his namesake, the new Taoiseach, makes the point that bigger venues have the capacity to be divided into a number of pods to facilitate greater numbers than the current 200 allowed at an outdoor event, which will rise to 500 next week when phase four commences.

“We have written to the Department of the Taoiseach to ask them to consider that [increased capacity] as the games in Wexford are about to start – and this is applicable across all counties – on the basis of the model the churches have used, particularly the larger ones.

“GAA grounds, the bigger ones like primary, secondary and tertiary county venues which many counties have at their disposal could be considered in the same context as the larger churches.

“This would involve a pod system: for instance this weekend you would be able to have four pods of 200 and the stadium could be separated into distinct areas with specific access and egress channels, toilets and sanitisation areas.

“We’re not looking at mass attendance or anything and you’d be well able to implement social distancing.”

If successful, the revision would allow crowds of between 800 and 2,000 to attend depending on whether the baseline is 200 or 500.

At a time when there is anxiety about rising numbers in the pandemic statistics, Martin and Wexford are writing from a position of strength. The county and neighbouring Waterford have the lowest per capita rates of Covid-19 in the country with .0015 and .0014 per cent respectively, having recorded 221 and 165 cases as of midnight last Saturday.

“We have written to make a specific case but it would also be more widely applicable,” he says.

“Wexford and Waterford are the counties with least transmissions so obviously there was something about geographical location in our submission. The vast majority of cases have been in north Wexford and closer to Dublin. Anecdotally there has been a rigid observance of guidelines but I’m sure the same could be said of other counties.”

The county’s hurling championship gets underway on Friday and the meeting of Oulart-The Ballagh and St Martin’s will be broadcast nationally from Chadwick’s Wexford Park on TG4 at 7.30pm.

Martin also believes that such a dispensation could be fair recognition for the contribution to the community made by members of GAA clubs during the most intense days of the lockdown.

“I would hope so. First and foremost we realise that safety is the paramount concern but 500 is not adequate to satisfy the demand of certain games in certain communities.

“In Wexford every club had a designated person to ensure a community response. We have argued that if it can be done safely, and we believe that it can, some element of compromise is possible.”

The county believes that its three main venues – Wexford Park, Bellefield in Enniscorthy and O’Kennedy Park in New Ross – would be well able to host up to 2,000 in four pods of 500.

Tickets are available only from the relevant clubs or to season ticket holders. Because demand is expected to be so high, the latter group may be restricted to members of the competing clubs.

Martin also argues that unlike the church services, matches take place outdoors where the chance of transmission is 20 times smaller and that the GAA is used to stewarding such events.

“Bear in mind that on the beach at Rosslare at the weekend there were certainly in excess of 500 people. The vast majority of those present were behaving responsibly but it was down to individual responsibility, whereas in this context the GAA has a good record of supervising crowds.

“The other thing is that churches have been able to allow families to sit together in a pod and there’s scope for that within the GAA.”