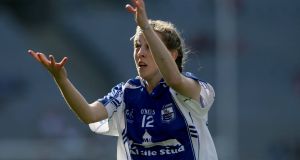 The Déise girls ran out 3-11 to 1-11 winners at Fraher Field to book a first Munster senior final appearance in 10 years.

The landmark result also marks Waterford’s first time to beat the Rebelettes in the senior championship since 2003.

Cork now face a winner-takes-all clash with Kerry in a fortnight’s time to see who will provide Waterford’s provincial final opposition.

Fresh from stunning the Kingdom last month, Waterford made sure of their final place by making it two wins from two in the round-robin series.

On the weekend it was confirmed that dual player Rena Buckley will not be committing to football this year, and in her absence Cork fell to their first championship defeat since the 2015 Munster final loss to Kerry.

Waterford were off to a flyer when Aileen Wall, brilliant throughout, scored the opening point.

Remarkably, Pat Sullivan’s charges would lead from there all the way to the finish, and they were further boosted by Roisin Tobin’s brilliant third-minute goal.

In the 14th minute, Grainne Kenneally netted Waterford’s second goal and by the 22nd minute, all six of their starting forwards were on the scoresheet.

Aine O’Sullivan’s 25th minute goal hauled struggling Cork back into contention but Ephie Fitzgerald’s visitors still faced an uphill task ahead of the second half, trailing by 1-3 to 2-6.

Waterford had played with the breeze in the opening half and while Cork have found themselves in worse situations in championship football, this was one rescue act they couldn’t pull off.

Two brilliant Michelle Ryan points early in the second half maintained Waterford’s momentum but a run of five unanswered scores had Cork ominously in contention with nine minutes left.

Cork had moved to within four points, 1-9 to 2-10, but Wall found the top corner for Waterford’s third goal in the 52nd minute and that proved a pivotal score.

That strike had Waterford 3-10 to 1-9 clear and another Michelle Ryan point stretched their advantage.

Cork did register the final two scores of the game, midfielder Jess O’Shea on target with both, but Waterford were left to savour a famous victory, one that blows the race for provincial and All-Ireland honours wide open.

In Leinster, meanwhile, Laois beat Kildare by 2-13 to 2-8 at O’Connor Park in Tullamore, and will now face Dublin in the provincial semi-final.

Laois led by 0-7 to 0-3 at half-time, before Erone Fitzpatrick netted a crucial goal early in the second half for the O’Moore girls.

In the closing minutes, Erica Burke goaled for Kildare but that effort was cancelled out by Fitzpatrick’s second goal.

There was still time for Trina Duggan to net a penalty but Laois held out for the five-point victory, on a day when Emma Lawlor top-scored with 0-8, including five from play.

In the Leinster intermediate championship, Meath enjoyed an impressive 6-8 to 0-9 victory over Wicklow.

And on Saturday, Tipperary’s intermediates racked up a huge 8-16 to 1-3 victory over Limerick in Munster, as Roisin Howard collected 3-2 for the Premier County.