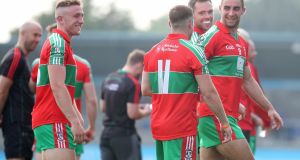 The former US speaker Tip O’Neill is widely credited with the catchphrase, “all politics is local.” But it would seem RTÉ have realised the great appeal of local sports in their nationwide moving about to showcase the GAA club championships in various counties, with Dublin football getting the star treatment on the “Saturday Game” in a marathon session that unfortunately provided one-sided affairs.

Still and all, in fairness to studio presenter Joe Stack and guest analysts Niamh McEvoy and Jason Sherlock, they managed to explore many areas rather than focusing on what had happened on the actual field of play at Parnell Park.

And, as if to underscore the fragile nature of sporting life, McEvoy, responding to a question from Stack, admitted that the upward trending of Covid-19 cases, might mean that these championships might not go the full distance. “I wouldn’t be massively confident,” she replied, believing “we’ve been very lucky to have had any football at all this summer . . . I can’t say I would be shocked if it wasn’t finished either.”

The increased usage of women footballers to provide their say on men’s matches, it must be said, is one of the more progressive moves by the RTÉ sports department and, certainly, McEvoy provided insights that demonstrated knowledge of the club dynamics in the capital.

While Mayo footballer Cora Staunton, in her role of co-commentating with Marty Morrissey on the opening Ballymun Kickhams-Thomas Davis affair, was also a good addition in that role.

Marty being Marty, he took his opportunity in the second-half water break of that match to get himself an exclusive from his sidekick.

“She can’t escape me here in the commentary position,” said Morrissey as the camera shots provided evidence that the pair were keeping their social distance on the open air commentary gantry. “Let me ask you Cora, are you going back to Australia?” he asked of the Mayo player who has played Aussie Rules with the Sydney Giants since 2018.

“Can I run away now?” wondered Staunton who must have known there was no escaping Marty. “I will give you the politically correct answer, the hope is if the body stays well over the next couple of weeks playing club with Carnacon, the hope is to go back (to Australia) . . . obviously with the injury last year, I am only back playing club football and I will give it a right go. All going well, I will go back.

“Thanks for giving us the little exclusive here on the Saturday Game, you had little or no choice,” said a chuffed Marty.

Of course, McEvoy is another Gaelic football star who has taken the route Down Under to play Aussie Rules, in her case in Melbourne, and the Dubliner too has signed a new contract to play for another season. There is a catch, though. Covid-19, of course. “Victoria is back in a second lockdown, so there’s still a lot of doubt. Covid seems ever-present at the minute, hopefully we will get back over. But I’m absolutely committed to Dublin (for the championship).”

That player drain from the GAA to the Australian Rules has accelerated in recent years but, in responding to a query from Stack if that was a worry for the GAA, McEvoy offered the opinion that “you could have less girls going over” in future years as the AFL Women’s expands to a longer season that could overlap with the GAA’s season.

Given the positive reaction to “Passing It On” screened last week on RTÉ television, it was rather fitting that Ballymun Kickhams were featured in one of the live matches and able to provide evidence of that club culture shown in Sorcha Glackin’s documentary.

After Ballymun’s easy win, Morrissey went down onto the Parnell Park pitch to have a chat with Paddy Christie - wearing a Tipperary jersey - who was one of the inspirations behind the documentary.

“I watched it twice on plus one afterwards,” enthused Morrissey of the impact it had on him.

Christie wasn’t falling into any trap of self-glorification, showing humility in emphasizing the most gratifying aspect was the reaction he had received from “across the country, from people who had done the same thing . . . this is happening right across the country,” replied Christie, and not just in GAA. “Soccer, rugby, basketball, (people) putting in voluntary time and I was very lucky it was highlighted.”

In the end, it all comes back to local.